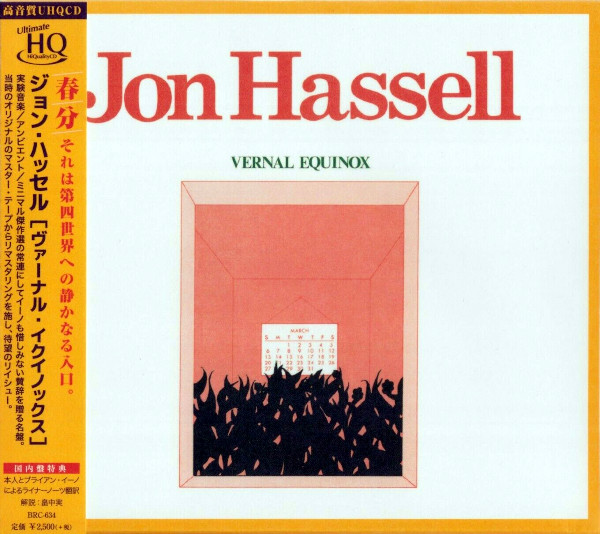 Kronomyth 1.0: Equinox and no one answers.

It’s a long series of left turns in life that leads you to listening to Jon Hassell’s Vernal Equinox at four o’clock in the morning. From there, it’s down the rabbit hole in earnest… microtones, pandit pran nath, motorola scalatron and bosanquet. All of it sounds wonderfully erudite until you replace the words “karlheinz stockhausen” with “jango fett” and realize that you’ve accidentally wandered into the music school equivalent of a Star Wars BBS.

If I don’t get jazzed about chromatic scales, pity me my dull existence. I’ll grant you that a world with the music of Jon Hassell in it is a more interesting place. On this, his first album, Hassell introduces the elements that would more or less define his music for the next four decades: electronically treated trumpet ragas interwoven with natural sounds (birds, insects, water). Sometimes, this music feels like “elephant jazz” (Viva Shona) or what might have happened if Miles Davis had traveled with The Beatles to India. (Actually, a lot of things might have happened during that trip.) I’m sure that’s an oversimplification of all the chromatic goodness going on, but I’m a simple man with a limited lexicon and an apparent saturation point for listening to a bagpipe being run over endlessly by a golf cart.

Again, probably worth reiterating here, I enjoy the music of Jon Hassell. It’s otherworldliness feels magical. In fact, as I was writing the words “melted music bubbling in a witch’s cauldron” to describe what I was listening to, I noted that the song was called Hex. Clearly, Hassell had cast his spell over the listener as intended. A lot of avant-garde music can feel arbitrary to the uninitiated, but Vernal Equinox doesn’t simply appear and disappear; it arrives at its appointed hour in its appointed place. We simply need to stand still and listen, although stillness in this world is hard to come by unless it’s four o’clock in the morning and the whole house is quiet.

One of the more interesting aspects of Vernal Equinox is its array of primitive synthesizers. (I say “primitive” when in fact they were very complicated machines with knobs and wires protruding everywhere.) The Serge synthesizer, Motorola Scalatron (which literally had to be the first name they thought of for it) and Buchla synthesizer are more likely to be encountered in a museum than the liner notes of a record album. They serve two purposes here: to provide a drone backdrop (“Similar to a tanpura,” he wrote from the rabbit hole) and transmute the trumpet and keyboard sounds being played by Hassell. It’s here that the primitive and futuristic elements of the music are alchemically transformed into a new kind of future primitivism that Hassell later dubbed fourth world music. (Ooo, that’s me getting all pedanticky.)

The meeting with Eno was probably eenevitable, collector of oddities that he is, and Eno’s electronic treatments elevate the music by one imaginary notch. Yet it’s clear from Vernal Equinox that Jon Hassell had already set himself upon a unique path that would lead through the undiscovered lands between Eastern music and Western jazz. It is the dreamsleep of Africa channeled by an Indian spiritualist and recorded through an electroencephalogramophone.

All songs written by Jon Hassell.