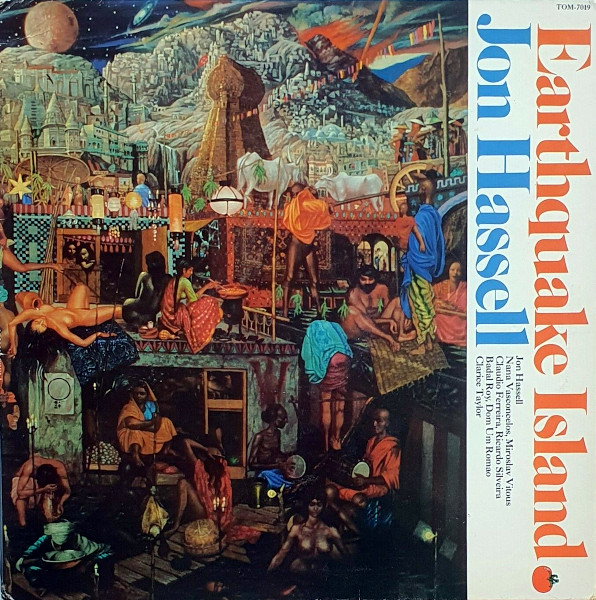 If you’ve ever wondered what Jon Hassell would sound like in a Brazilian jazz band, why?

You have an idea of what a Jon Hassell album sounds like, or think that you do, and then an Earthquake Island comes along and shakes up your world. The avant-garde musician’s second album is Brazilian jazz featuring synthesizers and his distinctively future-primitive trumpet playing. The sum effect is as though some strange, otherworldly bird has made its home in the jazz forest, its bizarre mating call echoing among the trees unanswered.

Although credited to Hassell, the music feels collaborative, particularly in the percussion and voices that Nana Vasconcelos adds to the arrangements. Listening to the record, you kind of wish Nana and Jon had hooked up with Patrick Moraz for an album or two. My initial reaction to this music was how funky it all sounded. You don’t show up expecting Jon Hassell to bring the funk, but Earthquake Island finds a way to balance hypnotic grooves with synthesizers and smoky strands of trumpet. The other surprise is the pedigree of the people that Hassell brought with him: Dom Um Romao, Miroslav Vitous, Badal Roy. They’re the sort of players you expect to support Don Cherry (which is exactly where Vasconcelos ended up).

Jazz and avant-garde music are hardly irreconcilable. Chick Corea straddled both worlds. In fact, the pairing of Clarice Taylor and Vasconcelos reminded me of Flora Purim and Airto Moreira in more than a few spots (e.g., Adios Saturn). And the Cherry-Vasconcelos outfit Codona was much weirder than this. Most of the time on Earthquake Island, it feels like Hassell is trying to connect the dots between funk, fusion and fourth-world music, as if to make the point that those reedy trumpet sounds were grooving on their own inner plane all along.

Where his first album, Vernal Equinox, was a pattern of things to come, Earthquake Island is a picture of what might have been. Had Hassell followed the road more travelled, he might have ended up another jazz eccentric playing to the hip admirers of naked emperors. Which isn’t to say that Earthquake Island isn’t a worthwhile listen, only it doesn’t cry out for an encore like Possible Musics. Earthquake Island, Voodoo Wind, Cobra Moon and Sundown Dance are slices of the same celestial circumstance, an interesting but infertile hybrid that transplants Jon Hassell’s solitary muse in a forest of Latin fusion like staged art.

All selections written by Jon Hassell. Arrangements and orchestration by Jon and the group.