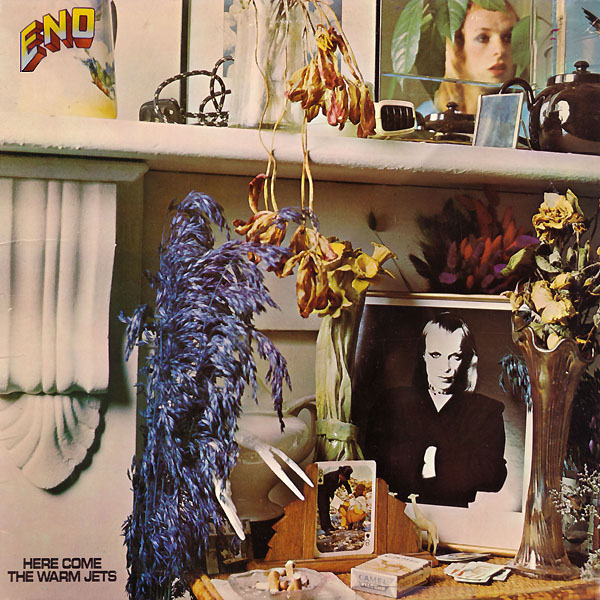 This is jolly uncle Eno skipping down from the high tower of pseudo-intellectualism (No Pussyfooting) to the cluttered basement of exhibitionist art rock last visited on Roxy Music’s first. With three Roxy members in tow, it’s tempting to see Jets as Eno fronting Roxy, except this is more about Eno being Eno not being in Roxy anymore.

He is, for one thing, much freakier than Bryan Ferry. If Eno in lipstick and eyeshadow is a sight, songs like “Dead Finks Don’t Talk,” “Baby’s On Fire” and “Blank Frank” are a sight stranger. Credited with treatments and simplistic keyboards, you might mistake Brian for a bit player in his own circus, but make no mistake, he is the master puppeteer, ushering in a remarkable assortment of defiantly quirky rock songs, feedback-drenched yet melodious mutations and some wistful songs that show the artist’s sensitive side. Subsequent albums would refine this approach, then abandon it altogether; none of them have the exuberance of Jets.

Although Roxy is the reference point, Eno isn’t remotely interested in cultivating Ferry’s urbane persona. This album is all about pushing buttons, pushing boundaries, pushing his own personal freak flag further up the pole. Listening to this twenty-odd years ago, I had the impression I’d stumbled into a very big rabbit hole where all the strange fantasies I had about music had come to life. It took a series of stifling ambient albums to shake me out of my reverie of Eno, but not before I’d snatched up all of the classic “vocal” albums. These albums still form the foundation of what I listen to today and represent some of the most imaginative, unconventional and exciting works I’ve heard.