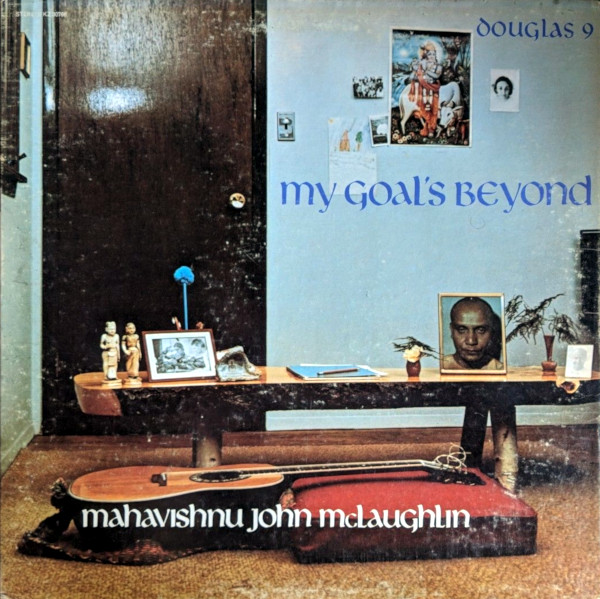 The first “Mahavishnu” recording features acoustic Indian raga jazz on side one and his flamenco-style acoustic jazz playing on side two.

This record is the first to reflect John McLaughlin’s spiritual journey as a follower of Sri Chinmoy, marked by his taking on the new name of Mahavishnu. The first side of music is an interesting mix of Indian music (tabla, tanpura) and acoustic jazz, with McLaughlin emulating (after a sort) a sitar on his acoustic guitar, accompanied by a handful of top-tier jazz players (Jerry Goodman, Dave Liebman, Billy Cobham, Airto Moreira, Charlie Haden). The second side is McLaughlin on solo acoustic guitar (with occasional gong), playing mostly standards plus a few originals. It’s a very different journey than his earlier records, but with John McLaughlin anything is possible.

The two “Peace” numbers could be seen as a precursor to Mahavishnu Orchestra—or, more appropriately, as Mahavishnu Orchestra unplugged. The Inner Mounting Flame is a much more electric affair, but the first half of My Goal’s Beyond shows how McLaughlin planned to fold the violin and his newfound spirituality into his music. Liebman plays the flute on the first Peace, soprano sax on the second, but otherwise they’re of a piece.

The second side showcases McLaughlin’s fiery fingerwork on the acoustic guitar. If there were questions of his pre-eminence on the instrument, “Goodbye Pork-Pie Hat” answers them all. His style is more that of a classical guitarist, conjuring all manner of sound from his instrument by using different picking and strumming techniques. While some have accused McLaughlin of lacking emotional depth, I wonder if it isn’t that your brain is so engaged by his articulated playing that your heart forgets how much fun it’s having. The fact that many of the songs are multitracked doesn’t matter, as your ears will marvel at the tripping leads he achieves on acoustic (e.g., “Hearts And Flowers”). If the first side points forward to the Mahavishnu Orchestra, the second side points ahead to the acoustic collaborations with Paco De Lucia and Al Di Meola.

Among the pre-Orchestra albums, My Goal’s Beyond seems to me the most calculated in planning and execution. Extrapolation was just a jam session (albeit a good one), Devotion an extension of his work with Tony Williams Lifetime. My Goal’s Beyond isn’t influenced by anyone; it’s McLaughlin in search of his own sound, which led him to Mahavishnu Orchestra. More than merely an acoustic sketchbook of things to come, the album is a marvelous showcase for his acoustic interests and abilities.