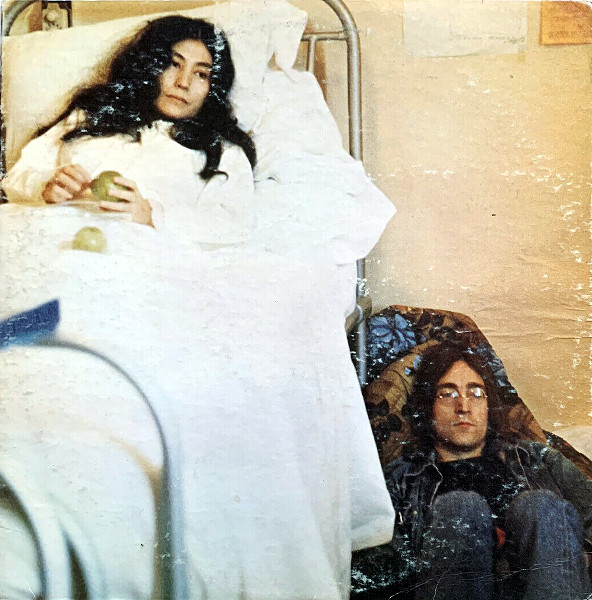 Primal scream therapy and a miscarriage are the sources for John and Yoko’s second album of sound.

Kronomyth 0.6: Life with the layabouts.

The opening moments of Cambridge 1969, featuring Yoko Ono’s piercing wails and John Lennon’s atonal guitar feedback, set the stage for Life With The Lion’s calculatedly confrontational tone. Two Virgins was easily dismissed as folk art, a single concept (What is music?) not so much explored as stretched out in an interminable question. By contrast, Yoko and John actually sculpt their sonic clay to achieve a desired end here. “Cambridge 1969” is a kind of precursor to Lou Reed’s Metal Machine Music (it’s also mercifully shorter), a duet of pain from singer and guitarist that is harrowing in the extreme. Although this is a live recording, and it’s unlikely the pair was working from sheet music, it’s clear that they went into this performance with a good idea of the type of sounds they were going to make.

No Bed for Beatle John is an Oriental plainchant, with Yoko singing about an incident during her miscarriage (the hospital’s refusal to give John a bed as he stayed with his wife) that somehow matter-of-factly becomes a discussion of Apple litigation and the infamous Two Virgins cover, while John sings counterpoint softly in the background about his upcoming divorce to Cynthia and other matters. It’s an interesting look at two minds on different planes, with a form that again suggests premeditation on the pair’s part. That’s followed by Baby’s Heartbeat, a recording of Yoko’s fetus that sounds remarkably alien, succeeded by two minutes of silence to represent the baby’s passing from this world. It may not be music, but it is art that makes a powerful statement. Yoko takes the controls (literally) for Radio Play, as she coaxes short bursts of sound from the radio by flipping the dial quickly (background conversation is also heard). This is the closest cut to Two Virgins, though the idea of using the radio as an instrument is very clever (pre-dating everything from record “scratching” to the electronic experimentalists of the ‘70s and ‘80s).

Of the three experimental albums that John and Yoko made, Life With The Lions is probably the most deserving of serious study. The Rykodisc reissue includes two bonus tracks: Song for John (think of it as Yoko’s take on Lennon’s “Julia”) and Mulberry, a nine-minute piece that features Yoko’s interpretive vocal wails and John’s guitar tunings (a la “Wild Honey Pie”). Although it’s not for everyone, this album does compare favorably to the work of modern composers like John Cage and George Crumb.