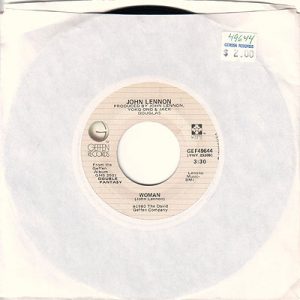 A flawless love song that finds Sir John figuratively on contrite, bended, knobby knee asking for forgiveness and love from Yoko. The sentiment is simple yet beautiful (I write “yet” because simplicity isn’t usually what I’m after), but unfortunately the timing of the single—less than one month after his murder—was surreal. On a lighter note, I used to play the B side (Yoko’s “Beautiful Boys”) in the diner all the time, constantly confusing it with “Beautiful Boy (Darling Boy)” and then being disappointed when I realized it wasn’t. Must’ve happened half a dozen times. Here’s to hoping I don’t come back in my next life as a lab rat. Ozzy Osbourne later did a cover version of this song for his album, Under Covers. John Lennon covering “Goodbye To Romance”—now that would have been interesting.