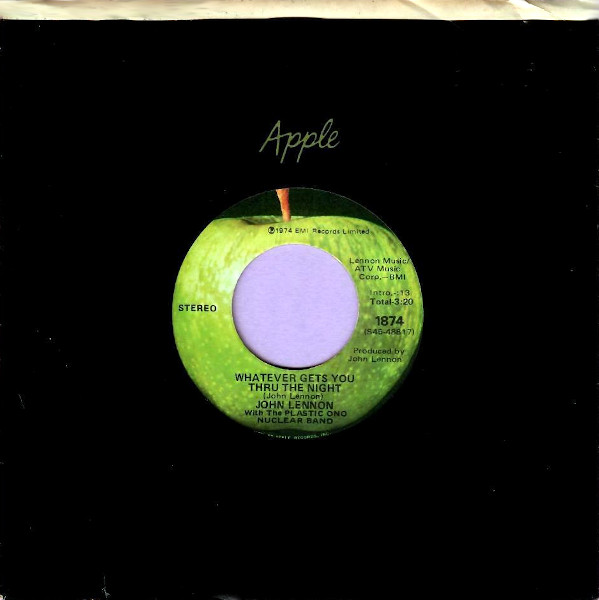 John Lennon hitches a ride on the Elton John juggernaut for his first #1 single as a solo artist.

Kronomyth 7.1: A couple of Johns take turns being on top.

John Lennon and Elton John come together, what(ever)’s not to love? When this came on the radio, it was like being invited to a three-and-a-half-minute party. The sax solo from Bobby Keys is pure magic; not bad for a first take.

Elton bet Lennon that the song would reach #1 (until that point, Lennon was the only member of The Beatles not to achieve the feat) and Lennon agreed if it did to join Elton John on stage. Two months later, John Lennon appeared on stage during Elton’s Madison Square Garden performance and played “Whatever Gets You Thru The Night,” “Lucy In The Sky With Diamonds” and “I Saw Her Standing There.”

The flip side is “Beef Jerky” from the same album, Walls and Bridges. It’s an instrumental with horns and a pulsating rhythm; reminds me of the half-baked treats that Paul included on his early albums. “Beef Jerky” is credited to John Lennon and the Plastic Ono Nuclear Band with Little Big Horns and Booker Table and the Maitre D’s, that last name being a playful twist on Booker T. and the M.G.’s.