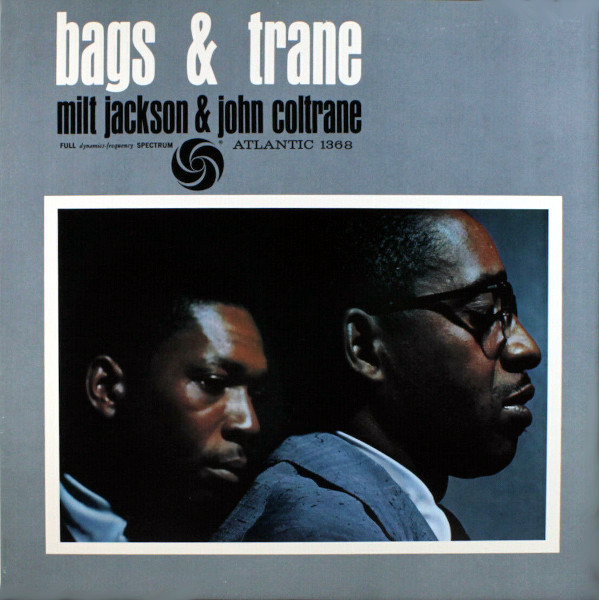 The best vibraharpist and the best tenor sax player of their day join forces for an album that, frankly, isn’t their best.

When, at last, the grass and I have good, long conversation about the earth and all things on top of and underneath it, neither of us will mention the serendipity of Bags & Trane. That Milt Jackson and John Coltrane left a recording of their encounter leaves us with a pleasant forty-minute diversion, leaves Atlantic with another chance to glut the market with Coltrane albums, but whether it leaves the earth in pursuit of higher things, no.

Bags & Trane is exactly what it says it is: Milt Jackson and John Coltrane playing together in what constitutes a partial merger of their two quartets: Paul Chambers on bass, Connie Kay on drums and Hank Jones joining the occasion on the piano. The group has some chemistry, Chambers and Kay seem to get on well together, Jackson and Coltrane trade solos, and the record ends. As tempting as it is to cast this as a meeting of titans, Coltrane was simply passing through. The decision to release these sessions coincided with a whirlwind year in which Coltrane released three original albums plus three albums of archival material. Of the six, this or Settin’ the Pace would settle to the bottom.

Jackson “wrote” two new songs for the occasion. I put that in quotes because Bags & Trane is just a basic jazz blues frame on which to hang solos from the band. The Late Late Blues is more interesting but, again, it seems to be mostly made up of Jackson riffing on the vibraharp against a familiar blues jazz theme led by Chamber’s bass. A minute or so into both tracks, you know where things are headed as you wait for Jackson and then Coltrane to take turns soloing.

The three covers are more original, ironically. The band does unexpected things with Three Little Words, twisting the melody into an almost unrecognizable shape. Connie Kay gets a neat little solo in here that shows why he functioned so well as a second percussionist in the Modern Jazz Quartet. The Night We Called It A Day is the obligatory ballad, and the album’s prettiest number. Be-Bop is a steeplechase that seems to give Chambers the highest hurdles to clear with its rapid pacing.

The combination of vibraharp and tenor sax in a quintet setting is interesting. When the two principals involved are the greatest vibraharpist and tenor saxophonist of their day, even moreso. But I personally feel the praise heaped on the pair for this particular session is misplaced. There’s not enough interplay between the players and the material is merely okay. Again, just my opinion, and I do think the record works well as background music, though I’m sure there are plenty of MJQ records that have more to offer. Subsequent reissues added one more Jackson/Coltrane collaboration (“Stairway to the Stars”) and two Coltrane recordings to the original album.