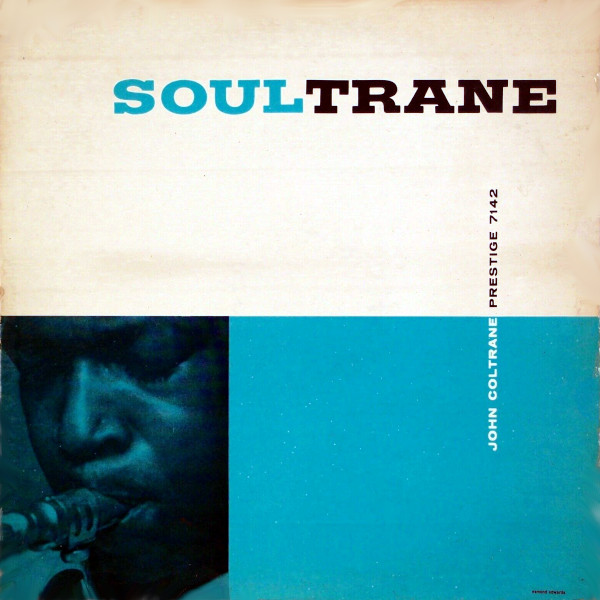 The album that introduced the world to Coltrane’s sheets of sound.

Just a few days after recording the first session for Miles Davis’ Milestones, John Coltrane, Red Garland and Paul Chambers (with Art Taylor) returned to the same studio to record Coltrane’s next album, Soultrane. This time, Coltrane’s entrance is immediate and his presence is enormous. Good Bait is a tuneful number from Tadd Dameron and Count Basie that delivers instant gratification and stands as the album’s most hummable track. Coltrane completely overshadows everything until Garland slips in an impossibly cool solo, and you’re reminded that you’re listening to three-fifths of the world’s greatest quintet and arguably its greatest quartet. I Want To Talk About You is a Billy Eckstine ballad featuring Coltrane’s big, beautiful, lyrical passages and a completely different solo from Garland rendered in dream-like clusters of notes.

The second side comes out swinging with You Say You Care (from Gentleman Prefer Blondes), with Coltrane and Garland serving up another great set of solos and Taylor getting into the act with some art-ful playing. Theme For Ernie, written for alto saxophonist Ernie Henry (who died of a heroin overdose at the end of 1957), has some gorgeous melodic shifts that remind me of The Beatles’ “Michelle.” The album ends with another sped-up Irving Berlin song, Russian Lullaby, with some breathtaking soloing from Coltrane. Commentator Ira Gitler famously referred to Trane’s performance on this track as “sheets of sound” because the notes create a continuous stream of music; the music literally explodes from Trane’s tenor in a gush of creative force that somehow, impossibly, is shaped by will at the speed of thought. It reminds me of those Michael Jordan highlight reels when they would slow the video down and you would see Jordan making millisecond adjustments in a way that could only be described as instinct and intelligence perfectly comingled.

Despite the absence of a Coltrane original, Soultrane is every bit as essential as John Coltrane with the Red Garland Trio. Both albums represent some of the greatest tenor saxophone playing ever recorded and serve as a perfect introduction to the genius of the classic Coltrane quartet. The only (slight) knock I have on the record is that Rudy Van Gelder’s recording seems a little off; unthinkable, I know, so maybe it’s just my ears playing tricks.