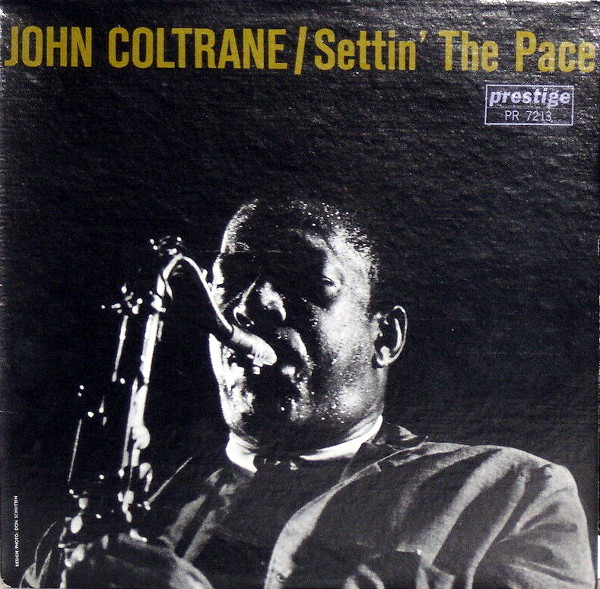 Prestige dusts off another Coltrane session, this time with the Red Garland Trio, for their continuing ride on the gravy trane.

Kronomyth 11.5: You pace your money and takes your choice.

Prestige continued to cash in on John Coltrane’s rising star with another release from the archives, this time featuring the Red Garland Trio. Settin’ the Pace sets up four jazz classics that Trane and the gang knock down in rapid-fire fashion. Even the remastered version has its limitations, and the songs are little more than an excuse for Coltrane to cut loose, but listening to Trane on tenor sax is rarely less than joy itself. That said, there are probably a dozen Coltrane records you should hear first.

The recordings date from March 26, 1958, about the same time that the quartet released their first official album together, John Coltrane with the Red Garland Trio. (The four had appeared together earlier on the Prestige all-star album, Tenor Conclave.) It opens with I See Your Face Before Me, a song immortalized by Frank Sinatra on In The Wee Small Hours. Red Garland revives the splashing piano sounds at the beginning and, about two minutes in, the gorgeous theme gives way to Coltrane’s smooth-as-butter soloing. Unfortunately, the song never really recovers from the blow of Paul Chamber’s ill-advised bowed bass solo. From Ol’ Blue Eyes to Bing, the band presents a second offering from the songwriting team of Arthur Schwartz and Howard Dietz, If There Is Someone Lovelier Than You. Coltrane chooses a brisker pace, as he often did, and opts for an interesting, reedy style at the onset. In a minute or two, the song simply becomes another vehicle for Coltrane’s endless soloing, with shorter, perfunctory solos presented by Garland and Chambers.

Side two opens with Jackie McLean’s Little Melonae, a version of which Coltrane, Chambers and Garland had recorded with Miles Davis a few years earlier. This time, the group gives it a precise, almost clinical reading with Coltrane’s fluid soloing and Garland’s crisp, annunciated piano creating a nice balance. This would get my nod for the best performance on the album although, again, none of these songs would make my highlight reel for any of these musicians. The album closes with the post-depression show tune, Rise ‘N’ Shine. Coltrane and the band again speed things up; in fact, this is little more than a steeple chase with Coltrane’s celeritous saxophone front and center.

There’s too much talent in attendance here to dismiss Settin’ the Pace out of hand, and too many Coltrane recordings to vaunt it past the ranks of better albums. The approach on this session seems formulaic: state the theme, cram in about five minutes (or more) of solos and return to the main theme at the end. I’m glad these sessions weren’t lost to time, but whether or not you find time for it is a question of how much time in your life you’ve carved out for Coltrane.