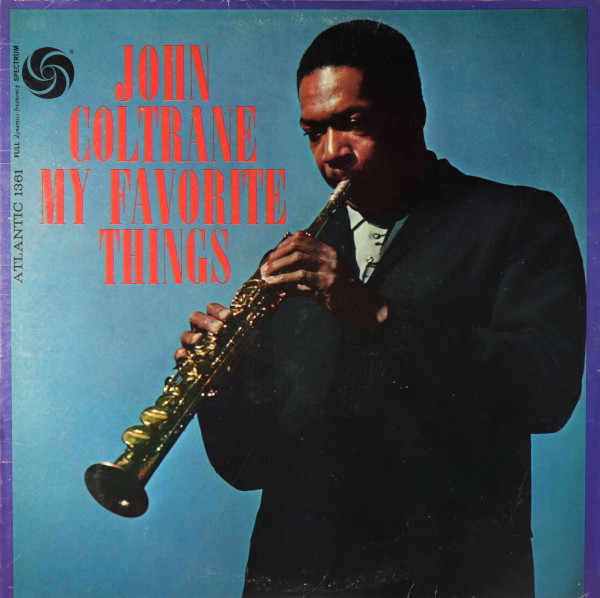 A fan favorite of evergreen genius from the “new” John Coltrane Quartet, featuring two tracks of Trane on soprano sax.

Kronomyth 9.0: One of these mornings, you’re going to rise up singing.

This is one of John Coltrane’s most popular albums, and not for nothing. With a young McCoy Tyner in the piano seat, the Coltrane Quartet Mk. II recorded some of the most sophisticated, smooth and superlative jazz music in the twentieth century. Listeners got a glimpse of it on “Village Blues” from Coltrane Jazz, but even that song didn’t prepare you for the wide musical vistas of My Favorite Things.

On the surface, the album plays out like Coltrane’s last: “safe” standards that seemed to step away from the daring originals of Giant Steps. But underneath the surface, these songs are a textbook lesson in how to re-spin a standard. You’ve heard Rodgers and Hammerstein’s  My Favorite Things a thousand times, but never like this. Tyner paints the melody in impressionist strokes, Elvin Jones dances on the drums, Steve Davis redefines the concept of steady support and Coltrane soars above it all (but sparingly) on soprano saxophone. The real triumph of the title track, however, is Tyner’s. His piano solo is stunningly beautiful, so much so that the best Coltrane can do is to copy it toward the end with a series of fluttering notes. (That’s the impression upon hearing this, although Coltrane may well have architected the move from the beginning.)

Tyner again emerges as the focal point on Cole Porter’s Everytime We Say Goodbye. Coltrane is clearly giving space to the 21-year-old pianist to shine, and it’s in this role that Coltrane begins to emulate his earlier employer, Miles Davis. It’s a missed opportunity to hear Coltrane really cut loose on a new instrument, but the introduction of the soprano sax is secondary to the introduction of the new piano player.

For my money, the first half of Summertime, and not the title track, is the album’s highest achievement. Coltrane just chews through the operatic Porgy & Bess tune with absolute abandon, while Tyner preserves the original’s ghost-like melody in splashes of color. Steve Davis does a solid job this time around, but squanders his solo opportunity, as does Jones. The second half gives the impression that “Summertime” lasts too long, but the solos from Coltrane and Tyner are indelibly etched on the listener’s mind. From the fragile original, Coltrane has spun a web of fearsome strength.

The Gershwins’ But Not For Me is the happy ending to the new quartet’s first adventure, with Coltrane in the driver’s seat, blowing past like a brilliant breeze. Tyner is again amazing; I would be hard-pressed to think of a more impressive debut for a jazz pianist than this album. The man passed away two months ago, which you may have missed because of coronavirus and jazz. Everything in this world passes and fades, but for forty minutes Tyner is twenty-one again, forever.