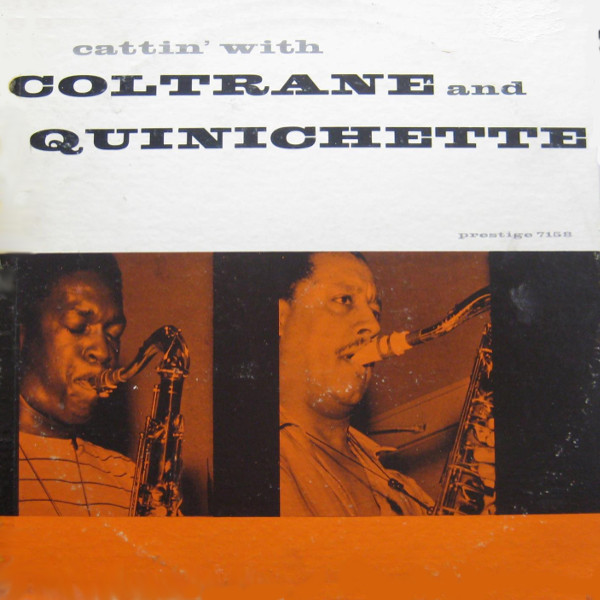 Two generations of tenors come together on this Prestige session from 1957 featuring a few Mal Waldron originals.

This recording of John Coltrane, Paul Quinichette and Mal Waldron dates back to May 1957 and marks the beginning of Prestige’s closet-clearing Coltrane releases. By 1959, Coltrane had already developed his “sheets of sound” style; Cattin’ is a throwback to an earlier age. The record features a mashup of Waldron’s rhythm section (Ed Thigpen, Julian Euell) with two of the artists he supported, Coltrane and Quinichette. Three of the five songs are Waldron originals, plus two familiar swing standards, “Sunday” and “Exactly Like You.”

If you’re looking for Coltrane’s frenetic soloing, you’ll find some of it here, but this is a relaxed set compared to most of Coltrane’s work. Quinichette is the more restrained of the two, letting his notes breathe in a languorous sigh. Coltrane achieves a different effect, playing terse notes in passionate bursts reminiscent of Miles Davis. Both tenor sax players force you to listen for different reasons; Quinichette because you want to savor every note, Coltrane because you don’t want to miss any notes.

You have the sense hearing the two trade solos that Quinichette was inspired by Coltrane’s aggressive style, and Quinichette fans might find the pairing more interesting than Trane fans for this reason. Or you could be a fan of both, and enjoy what each brings to the table. Such was the celerity of Coltrane’s development that Cattin’ feels older than it is, in part because the music belongs to the bygone era of swing. Waldron’s originals feel instantly familiar, using strong but relatively simple melodies that are executed cleanly at the onset and repeated throughout so that the songs never veer too deep into the woods.

In the 1990s, the session was reissued with a bossa nova take on the classic “Tea For Two,” which is fun if not exactly Coltrane’s finest moment. Cattin’ certainly isn’t the first, second or sixth Coltrane release you need to own, but you’d have to be a pretty harsh cat not to enjoy this swingin’ set.

* In contemporary sources, this song is credited to Chester Conn (music) with lyrics credited to Bennie Krueger, Ned Miller and Jule Styne.