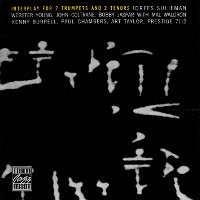 This is one of the earliest recordings of the Prestige All-Stars, an ad-hoc collection of stars from Prestige’s roster, featuring the first appearance of Mal Waldron’s “Soul Eyes.” Many years later, when Waldron passed away at the ripe old age (relative to jazz musicians) of 77, the NY Times would remember him as “the last accompanist of Billie Holiday and composer of the jazz classic, Soul Eyes.” Here in its sweetly savored seventeen-minute version, “Soul Eyes” is simply sublime. Waldron wrote the song specifically for John Coltrane and in many ways it’s the quintessential Trane track, unfolding in slow, rich tones with fluttering accompaniment, at once sensual and spiritual. The remaining tracks on Interplay For 2 Trumpets And 2 Tenors are just what the title implies: vehicles for Coltrane, Bobby Jaspar, Idrees Sulieman and Webster Young to strut their stuff. Honestly, I can’t tell the difference between Young and Sulieman since I’m not very familiar with their work. Jaspar, though quick, has a reedier tone than Coltrane; you can hear the two of them trade solos on “Anatomy,” although Jaspar fares better in an earlier exchange with one of the horn players. The opening “Interplay” is a swinging number with a strong melody, which makes up for a certain lack of chemistry among the players. An eight-piece with double trumpet/tenor can obviously be unwieldy, especially when you need to find time for everyone to solo. “Anatomy” and “Light Blue” are little more than platforms for that purpose. At some point in your life, you owe it to yourself to hear this version of “Soul Eyes.” You might even find that the melody to “Interplay” rattles around in your head for a while too. But Interplay isn’t the best way to experience these players, each of whom can be heard to better effect on their respective Prestige solo records. [Note: Subsequent reissues of this album included a live version of “C.T.A.” that was recorded on the same day and which originally appeared on Taylor’s Wailers.]

All songs written by Mal Waldron.

The Plastic
Co-credited to Bobby Jaspar, Idrees Sulieman and Webster Young and released on elpee in December 1957* in the US (Prestige, 7112). (*First appeared in 12/16/57 Billboard.)