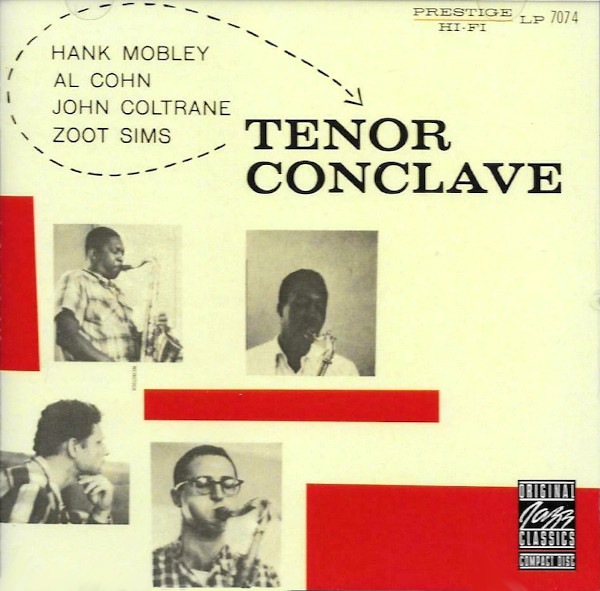 This is a treat for tenor saxophonistas: four tenors on four tracks, four your pure listening enjoyment. These early Prestige All-Star recordings are an embarrassment of riches, really, as they arranged titans like chess pieces in endless (and timeless) configurations.

Tenor Conclave is a meeting built on mutual respect; the quartet of horns and the rhythm section of Red Garland, Paul Chambers and Art Taylor play together very nicely, each bringing their unique voice to the material without shouting on top of one another. The opening number from Hank Mobley gets the session off to a fun start, with lots of solos and a lighthearted spirit throughout. “Just You, Just Me” is another brisk-paced number with fast, articulated solos from this fab foursome; it’s the loosest of the tracks in terms of performance (the solo trading at the end gets a little out of hand), but it’s a hoot to hear.

“Bob’s Boys,” the second Mobley original, is a bit more businesslike but still swings, and you can begin to make out the individual soloists while realizing that it doesn’t really matter who plays what or even what they play, but this preserved moment of great artists at play that matters. “How Deep Is The Ocean” is a soulful ballad with understated accompaniment and some gorgeous solos. Here we encounter the true province of the tenor, able to plumb the depths of sadness and beauty with artful grace. A bowed bass solo from Paul Chambers breaks things up, although I’ve always found it a little jarring. (Is there a bass player who hasn’t done the bowed bass bit at least once?)

Compared to Prestige’s Interplay for 2 Trumpets and 2 Tenors, Tenor Conclave is a more natural setting, even if the idea of four tenor sax players on one song seems unnatural. The music is essentially written for a quartet with lots of tenor solos; the moments where the four play together are relatively few. By contrast, the double trumpet/tenor lineup of Interplay was unwieldy at times. While it wouldn’t make my (imaginary) list of ten essential Coltrane recordings, Tenor Conclave is a small feast for tenor sax fans, although feel free to skip ahead to dessert, since “How Deep Is The Ocean” is the best part.