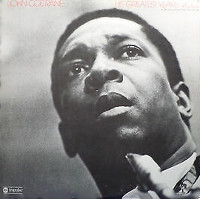 This is the last in a three-volume set from ABC that collects the best songs from Coltrane’s albums on the Impulse label with Jimmy Garrison, Elvin Jones and McCoy Tyner. At the time, His Greatest Years was probably the most exhaustive retrospective of his work, although it’s confined to a handful of years (1963 to 1967) during Coltrane’s deliberately difficult avant-garde phase. Despite the relatively small sampling of time, Coltrane (as we know) defied time, space and most other dimensions when he played, so the music collected here is remarkably varied. There are the perfect love songs where Coltrane blows aces (“Dedicated To You,” “Dear Lord”), the frenzied marathons where Coltrane literally spends his saxophone until there’s nothing left ( “Chasin’ The Trane,” “Cosmos”) and the glissandoing magic of his later works (“Expression,” “Welcome”). Also included here as an added bonus for collectors is a live version of “Nature Boy” recorded at NYC’s Village Gate on March 28, 1965 that originally appeared on the Impulse compilation, The New Wave In Jazz, and no doubt left both player and audience exhausted. The album ends on a risky note with “Living Space,” part of Alice Coltrane’s daring re-vision of her husband’s last recordings that appeared on the posthumous Infinity. In retrospect, “Living Space” is a prescient work that prefigures much of the avant-garde, multicultural and minimalist music to come; kudos to ABC for coming to Infinity’s defense so quickly. In 1980, after MCA acquired the ABC catalog, they reissued the three-volume series with its original cover artwork and simply stamped a new number on top of it.