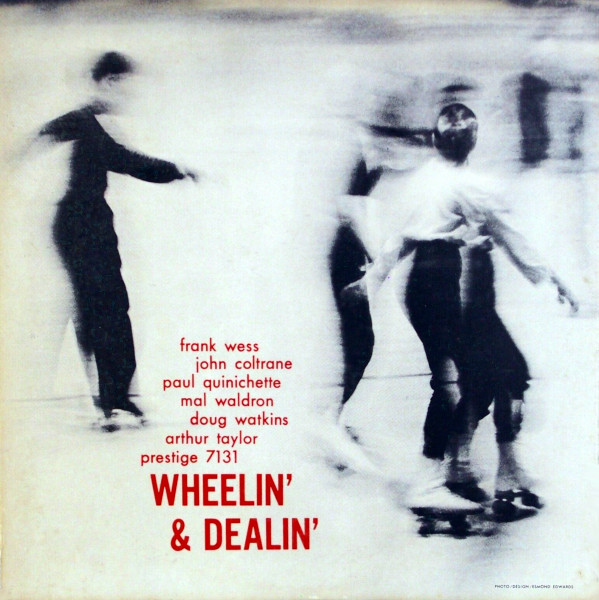 Another Prestige all-star album, this time featuring a trio of tenor sax players: Coltrane, Quinichette and the criminally underrated Wess.

Kronomyth 5.5: Fastest gun in the Wess.

The Prestige All-Star recordings tend to be hit or miss, since you can’t just throw a bunch of talented players together and expect sparks every time. Wheelin’ & Dealin’ is a miss: midtempo mid-50s jazz that never catches fire. The session is interesting for the attention it gives to Frank Wess, a prominent member of Count Basie’s Orchestra who splits his time here between flute and tenor sax while managing to outrun Trane in the bargain on the tenor sax shootout, “Wheelin’.” Coltrane isn’t exactly a no-show, but this isn’t among the top twenty Trane performances you need to hear. Paul Quinichette, the elder statesman, is simply outgunned.

The session features only four tracks, including two presumably sketched out by Mal Waldron on the spot, “Wheelin’” and “Dealin.” Rudy Van Gelder recorded two different takes of each, and the alternate takes appeared on subsequent reissues. Waldron seems to be a mainstay of these Prestige recordings, here joined by Art Taylor on drums and Doug Watkins on bass. (The rhythm section of Waldron, Taylor and Watkins had also recorded with Coltrane for Prestige earlier in the year, and those recordings eventually turned up as Dakar.)

Personally, I don’t go for Prestige’s approach of throwing multiple horn players into the mix and letting them duke it out; it’s a catfight, although I won’t argue that the competition can yield some interesting solos. Surprisingly, it’s Wess who comes out on top, both for his smooth sax soloing and soulful flute playing, the latter highlighted on “Robbins’ Nest” and the closing “Dealin’,” where Wess starts on flute and ends on tenor sax. While Quinichette and Coltrane fans can stay home for this one, Frank Wess fans should check this out at some point, since he shines here in some pretty impressive company.