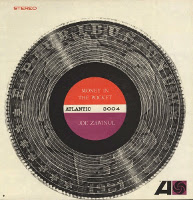 Kronomyth 3.0: DIME A DOZEN. If this album were simply bad, I could live with that. But it’s boring, and for a Zawinul record that’s unpardonable. Looking over my notes as I listened to this album, they’re pretty snarky: “Money in the Pocket” (“I would literally pay money for this song to end right now”), “If” (“The bass player should release his own album and call it Pussyfootin’”), “My One And Only Love” (“Who did they hire to tune their piano, Archie Bunker?”). The sentimental tracks are all right (“Sharon’s Waltz,” “Midnight Mood”), although here again they’re nothing that the hard bop era didn’t produce in better quality in barrels. It’s not a question of talent—Joe Henderson, Blue Mitchell and Pepper Adams are strictly top-shelf—but of wasted talent, as the players never rise above the role of hired horns. Zawinul, of course, got better (maybe they should have called this Newt’s Time), which is likely little consolation to anyone who bought this album hoping to hear the music of Weather Report in its earliest stages. Ordinarily, you could dismiss an album like this to youthful inexperience, but Zawinul was already an established player in his 30s. Listen to Herbie Hancock’s Takin’ Off (it’s a near certainty that Zawinul did) and you’d never guess that the pair would soon be comfortably mentioned in the same breath. If you’re a Weather Report fan, curiosity will eventually get the better of you—this despite the album’s generating universal ennui among critics—so all I can do is add my two cents and hope that it’ll encourage you to keep your money in your pocket.

The Pictures
Cover by Fuentes/McCann.

The Picayune
“Money In The Pocket” was also part of Cannonball Adderley’s live show around this time (1966), although it usually clocked in at over 10 minutes.