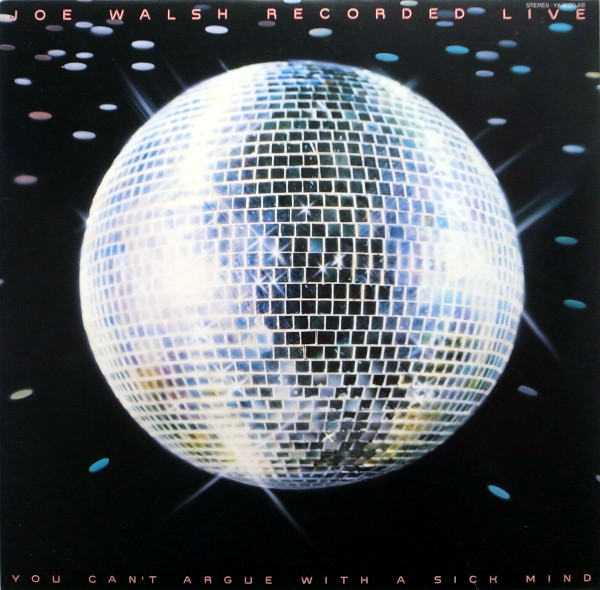 On the eve of joining Eagles, Walsh released this live disc to fulfill his contract with ABC Records.

Kronomyth 4.0: If you can’t soar with the eagles.

In 1975, Joe Walsh went on tour with a literal busload of players including three drummers, two keyboard players and his future partner in crime, guitarist Don Felder. It was a far cry from the trio approach of James Gang and early Barnstorm, but not so far a cry from the expanded lineup of Traffic on Welcome to the Canteen. Which wasn’t a great live album either. The performance of Turn to Stone on here is worth whatever butane you have left in your Bic lighter, don’t get me wrong, but You Can’t Argue with a Sick Mind is arguably his least essential album to date.

In Walsh’s defense, the original 1975 setlist had a few songs that probably would have sounded awesome: “Welcome to the Club,” “The Bomber,” “Funk #49.” They didn’t make the cut, with ABC opting to cut its costs with a single live album (no Frampton Comes Alive here). Also missing is the encore performance of The Beatles’ “Get Back” and Spencer Davis Group’s “Gimme Some Lovin’,” which I have kindly included in the video link below, because I figured what you really needed today was to hear “Gimme Some Lovin’” for the billionth time.

Like the guy in Amadeus who complained about too many notes, but I feel there are too many players here — the group is one guitarist shy of a lifetime achievement award performance. As a result, songs like Walk Away and Rocky Mountain Way, whose greatness lie largely in their economy, get loose treatments that lose some of their original energy. On the longer tracks, such as Meadows, the opposite happens as the arrangements are given a chance to stretch out. And, in a few cases, the live versions are actually better than the originals. Time Out sounds better than I remember and the sweet harmonies on Help Me Thru the Night, though likely the beneficiary of some studio doctoring, are a harbinger of the great things to come in the next chapter of Walsh’s career.

Honestly, I wasn’t holding my breath for a Joe Walsh live album. Given the diminished expectations I had, it’s better than I expected. The guitar solos, though too few, are a source of joy, and “Turn to Stone” is eight-and-half-minutes of awesomeness (so are the last few minutes of “Meadows”). I’m sure there are Joe Walsh fans who would defend this album to the death. I’ll bet they even like the album cover.

8-track version
A1. Walk Away
A2. Meadows (continued)
B1. Meadows (conclusion)
B2. Rocky Mountain Way
C1. Turn to Stone
D1. Time Out
D2. Help Me Thru the Night