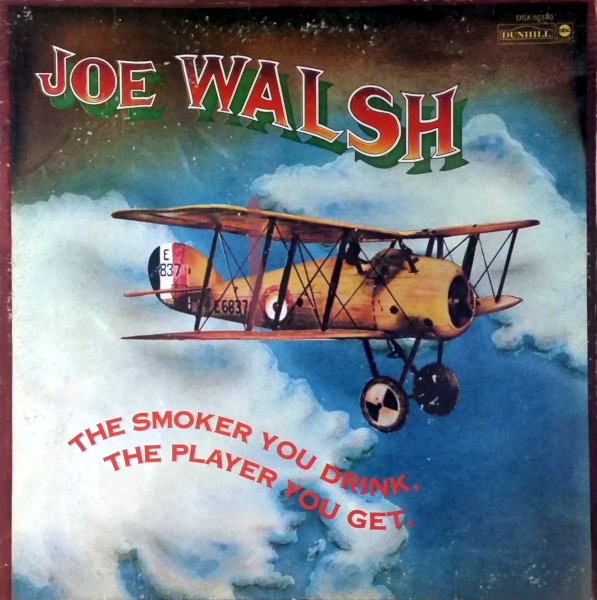 The second Barnstorm album is a minor classic and featured the hit, “Rocky Mountain Way.”

Kronomyth 2.0: You couldn’t get a better hit and two sides of Barnstorm.

This is the second Barnstorm album in all but name (the airplane on the cover is the only clue you’ll find). Songwriting is divided among all four members (Rocke Grace had been added on keyboards), singing is shared by three. Following the model set by James Gang, the record leads off with a brilliant rocker, “Rocky Mountain Way,” then proceeds to explore a range of musical ideas. If there were any question as to who would inherit the success of the original James Gang, The Smoker You Drink, The Player You Get settled it.

Rocky Mountain Way is both a nod to the past (“Funk #49,” “Walk Away”) and a look ahead to the future. It addresses Joe Walsh’s state of mind after leaving James Gang (belatedly, you might say) and features what would become hallmarks of his solo career: filtered vocals (suggesting he had again become self-conscious of his voice), slide guitar and the use of a talkbox. The synthesizers remain from his last record, although I couldn’t tell you what he was using (there’s no distinctive ARP sound like on his last record, Barnstorm). What follows is a member-by-member singing and songwriting showcase (sound familiar?). Joe Vitale’s Book Ends is a sentimental love song with a great arrangement from the band, Walsh’s Wolf is one of those light/dark numbers like his last album, Rocke Grace contributes the instrumental Midnight Moodies (with Vitale doing a fine impression of Traffic’s Chris Wood on flute) and Kenny Passarelli closes out the side with the sweet, Calypso-styled Happy Ways.

Side two splits the songwriting between Walsh and Vitale, but otherwise continues the eclectic approach. There’s a rocker (Meadows) that seems to borrow the riff from Deep Purple’s “Woman From Tokyo,” an ambitious pop song that Todd Rundgren probably wishes he wrote (Days Gone By) and a pair of dreamy ballads (Dreams, Daydream). They don’t make albums like this anymore, but they did in the Seventies. Maybe it was the influence of The Beatles, but there was a strong sense of “never write the same song twice” on rock albums from the decade. And so you would encounter albums that had a wide range of styles: rockers, ballads, blues & gospel numbers, soul, pop songs and instrumentals. Throw in a talented guitarist, and you ended up with a Stephen Stills or Dave Mason album. The Smoker You Drink, The Player You Get is better than that, in part because Walsh wisely surrounds himself with very talented and creative musicians and completely avoids the ego trip that these “solo” albums often become.

Honestly, none of the James Gang or Barnstorm albums floored me the first time around. They seem to start off with a great song and then get lost in a maze of different ideas. Over time, however, you start to find your way around them, and that familiarity is what separates a fan from a casual listener. It’s not something unique to Joe Walsh, of course. In fact, I found that albums I owned on cassette were more likely to be my favorites because I listened to them more often. 8-tracks, on the other hand, never stood a chance. Among the James Gang/Joe Walsh albums so far, The Smoker You Drink is probably the best, song for song. It rewards repeated exposure, so grab a drink (or have a smoke), press repeat and enjoy.

Original cassette and 8-track version
A1. Rocky Mountain Way
A2. Midnight Moodies
A3. Book Ends
A4. Days Gone By
B1. (Day Dream) Prayer
B2. Happy Ways
B3. Meadows
B4. Dreams
B5. Wolf