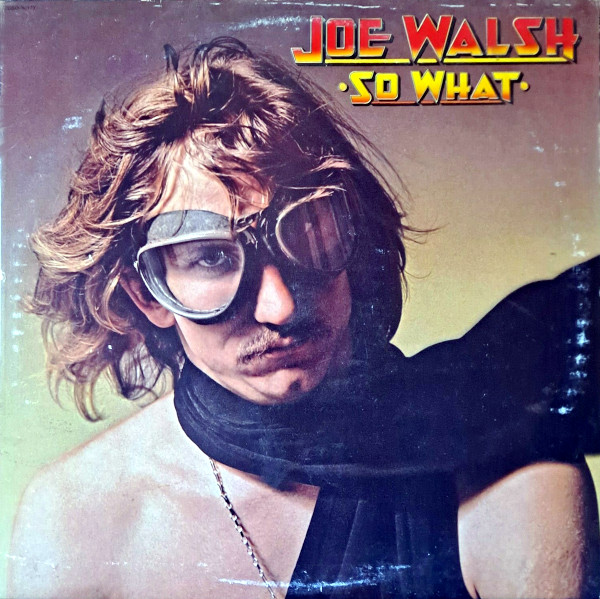 This is Joe’s tightest studio album to date, though one tinged with sadness in the wake of his daughter’s death.

So What was supposed to be Joe Walsh’s most sophisticated album yet, and so it is, but the death of his three-year-old daughter in April 1974 cast a pall over it. The title alludes to Walsh’s state of mind at the time and the realization that what was intended to be his most important musical statement to date maybe wasn’t so important after all. The album is also notable as a sort of prequel to the next phase of Eagles, as every member except Bernie Leadon (whom Walsh would replace) appears here.

You won’t find any breakaway hits on So What, just a tightened-up version of “Turn to Stone.” The rest of the songs find Walsh refining his broad tastes for guitar-driven rock (“Time Out”), electronic interludes (“Pavanne”), psychedelic rock (“County Fair”) and what could be described as California rock (“Falling Down,” “Help Me Thru the Night”). The album ends with a song written for his daughter, Emma, that’ll break your heart.

Despite the lack of a standout single, So What was a commercial success and continued to build a sizable cult around Joe Walsh. As guitar heroes go, you could do a lot worse, and his nasally voice does grow on you over time in a charming, self-effacing sort of way. I’m not sure Steve Miller was a really great singer either, and that never stood in his way of delivering the goods. Walsh overcomes his vocal limitations with solid songwriting, a willingness to experiment, and masterful guitar playing.

In the wake of The Beatles, rock musicians began to look at studio albums as a collection of artistic statements, paying careful attention not to say the same thing twice. So What is a good example of this, as Walsh recorded these songs over several months and used different lineups. It’s hard to believe that electronic classical music, syncopated guitar rock and sweet country-rock harmonies have anything in common, but in the eclectic and eccentric mind of Joe Walsh it all makes perfect sense.

All songs written by Joe Walsh unless noted. B4 arranged by Jimmie Haskell and Bill Szymczyk.