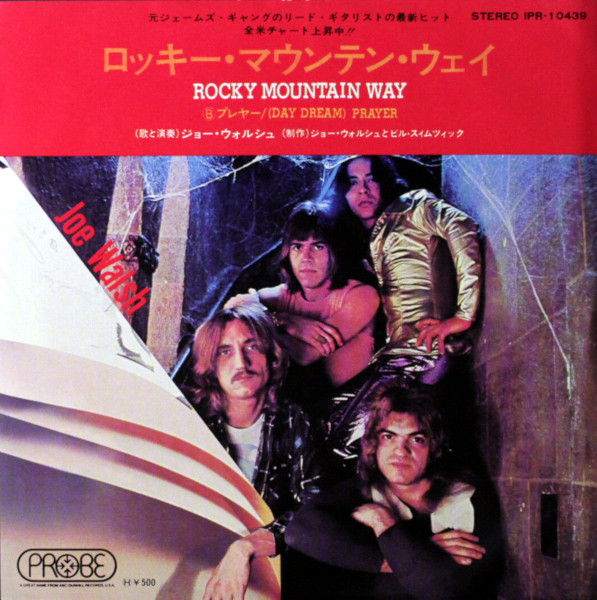 The single from Walsh’s second album showed he didn’t need the James Gang to be a bankable star.

Joe Walsh’s first solo album, Barnstorm, didn’t really have a hit single on it. His second album, however, did. Rocky Mountain Way instantly recalled his earlier hits with the James Gang, “Funk #49” and “Walk Away.” But where those singles landed comfortably in the middle of the Billboard Top 100, “Rocky Mountain Way” didn’t, spending a few weeks in the Billboard basement before fading from the charts. Rock & roll radio stations, on the other hand, kept the song in heavy rotation, particularly after Walsh joined the Eagles.

The single version is a substantial edit of the original elpee version, weighing in at a svelte three-and-a-half minutes. The intro, short guitar solos after the choruses, talkbox solo and closing guitar solo have all been cut in half. The editing job is actually very good, considering, but now that the human race has discovered it can listen to the same song for more than four minutes, the album version is the way to go.

“One day I was in my backyard in Boulder mowing the lawn and I was thinking, ‘Boy, I sure hope leaving the James Gang was a good idea!’ Because I hadn’t really surfaced as a solo act yet. I was almost there, but not quite. And then I looked up … and there were the Rocky Mountains. It was summer but you could still see snow on the back range. It just hit me how beautiful it all was, 5,000 feet up. And that was it – the words came: ‘Spent the last year Rocky Mountain way/Couldn’t get much higher.’ And the second verse is about my old management – telling us this, telling us that, time to change the batter. I got all of that at once. And I ran inside to write it down before I forgot it. Only problem was, I forgot to shut off the lawnmower. It kept moving and went into the neighbor’s yard and ate her rose bushes. Cleared a little path straight through. So those lyrics wound up costing me, I don’t know, maybe 1,500 bucks. But it was well worth it. The neighbor, though, she was pissed. I said to her, ‘You don’t understand! I got the words!’ But she just looked at me.” – from a Rolling Stone interview.

The B side is the last track from The Smoker You Drink…, (Day Dream) Prayer, in yet another permutation of the song’s title—the album refers to it as both “Daydream (Prayer)” and “Days Dream Prayer.” Written by Joe Vitale, this song always reminds me of Todd Rundgren in the piano intro, providing a nice, calm ending for the album and featuring a miniature angelic choir of Venetta Fields and Clydie King. At two minutes, it’s a bit of a gyp as B sides go, but they don’t call them B sides for nothing.