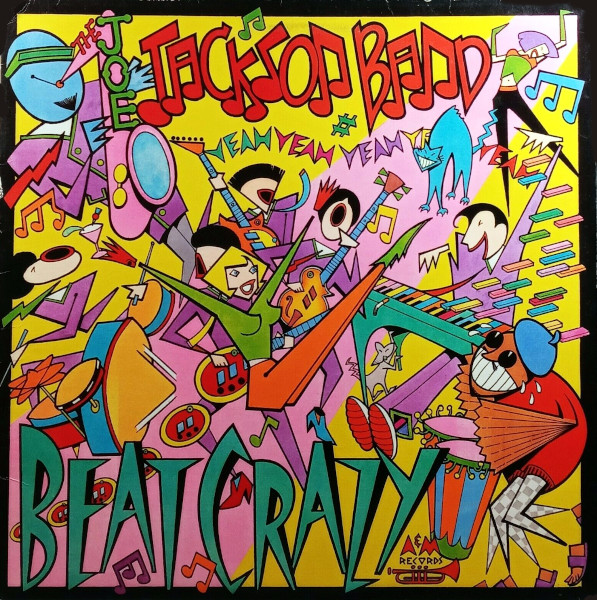 Dig that crazy beat, because there really isn’t much else to dig on here.

Kronomyth 3.0: Giddy down with that crazy beat.

Elvis Costello seemed to get more mellow with age (cf. Get Happy!!). Joe Jackson got more bitter on Beat Crazy. It’s a “difficult” album by design. The sweet melodies have been stripped away, and what remains are bone and sinew and bile. At least, that was my initial impression. Over time, I’ve softened on the idea of Joe Jackson making a reggae/punk record as prickly as a porcupine, because sometimes the world needs more pricks and fewer pets.

The first two JJ albums were giddy and sentimental in their own way. Beat Crazy has only two songs that could be considered tuneful, One on One and Crime Don’t Pay. They’re two of my favorite songs on the album, which should tell you where my loyalties lie. The rest of the songs are noisy, tense, ticking bombs of angst and anger. You could argue that the same emotions were roiling under the surface of a “Geraldine and John,” but that surface has been wiped off on Beat Crazy and what’s underneath is sometimes pretty ugly (e.g., Battleground).

So, that’s my warning for anyone lured in by the playful album cover and hoping to walk away humming a handful of new favorite Joe Jackson songs. Now for the good news: while the melodies are missing, the smart and stinging songwriter/arranger never left. The opening Beat Crazy is a bracing beginning to a brazen album, “One on One” offers a different take on the mature songcraft of “It’s Different for Girls” and “Amateur Hour,” while In Every Dream Home (a Nightmare) gets under your skin with a palpable chill.

Credited to The Joe Jackson Band, Beat Crazy actually feels less like a group effort than their first two records. Joe handles production himself and everyone (particularly guitarist Gary Sanford) seems on a tight leash. In fact, Sanford doesn’t even get a proper solo until the waning minutes of the last track, Fit. Graham Maby’s bass is spartan in spots (although he does get a vocal cameo on the title track) and only drummer Dave Houghton shines brighter this time around. Even JJ gets fewer opportunities to stretch out, with a modicum of keyboards and the melodica making its lone appearance on Pretty Boys.

All that said, the songwriting on Beat Crazy doesn’t disappoint. Jackson’s wordplay is as sharp as ever, his critical eye at the world around him unblinking in its dire assessment. In a sense, listening to this album is like getting your medicine without the sugar coating. Jackson clearly wanted to do something different and defy expectations on his third album. Is it an abrupt left turn? It seemed like it at the time. Still, it didn’t prepare you for the complete one-eighty of his next album, Jumpin’ Jive.

All songs written and arranged by Joe Jackson.