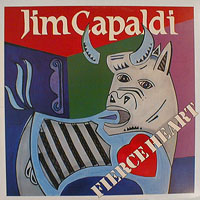 Kronomyth 8.0: ARC OF A DIVERSE ARTIST. Co-produced with Steve Winwood, Fierce Heart is a conscious attempt to channel Winwood’s success with synthesizers into Jim Capaldi’s career. The result is surprisingly effective; in fact, this might be the best solo album he’s ever recorded. Capaldi doesn’t rely completely on synthesizers, but blends them into the approach taken on his last record, Let The Thunder Cry. The songs are once again reassuringly familiar; “That’s Love,” “I’ll Always Be Your Fool,” Living On The Edge” and “Runaway” use established rock motifs. Capaldi’s not trying to rewrite the book of rock, simply add his two cents to the conversation. The songs this time favor love over social change; the funky “Don’t Let Them Control You” (a rewrite of a Brazilian song, “Olhos Coloridos”) is the lone agitator in an otherwise smooth collection. The album—his first for new label Atlantic—was his highest charting since his debut, Oh How We Danced, and produced two hits in “That’s Love” and “Living On The Edge.” Although the year started off well enough for Capaldi and Winwood, it would end with the deaths of Chris Wood and Reebop Kwaku Baah (both of whom were also born in the same year, 1944). Still, Fierce Heart remains something of a high point in Jim Capaldi’s career and a sort of late-season fruition of his partnership with Winwood. It’s not as heavy as some of his other pop/rock albums, but it may be the best argument for his strengths as a singer/songwriter. If Winwood is your cup of tea, Fierce Heart is your capaldi. And that’s no bull. (You see, the cover has a picture of a bull on it and… eh, nevermind.)

* Available on U.S. cassette versions only.

The Pictures
Design by Rocking Russian. Photography by Waring Abbott.