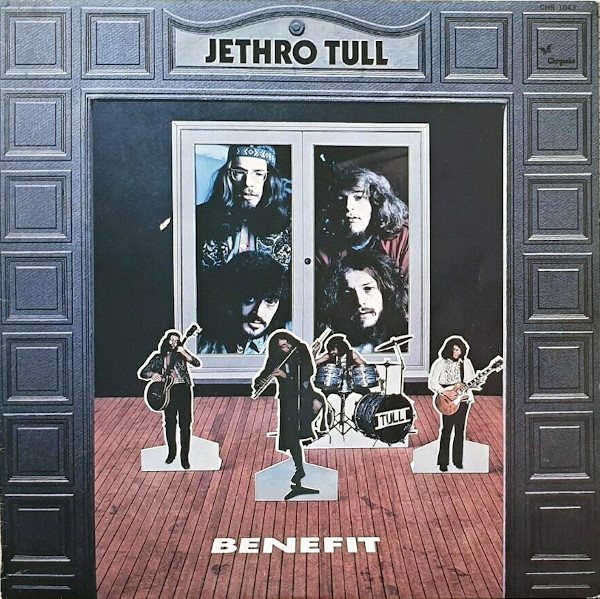 This marks the true beginning of the electrified Tull and the end of the classic lineup with Glenn Cornick.

The beneficiary of a rich sonic contrast that brought elements of light (acoustic guitar, John Evan’s piano) and dark (Martin Barre’s electric guitars) into the mix. Benefit is a noisier, heavier record than anything the band had done to date and a harbinger of what would follow (Aqualung et al). Where Stand Up played up the band’s acoustic side and thus had a bluesy gentility to it, Benefit bares its teeth in the distorted, drenched electric end of the musical spectrum.

Ian Anderson had already shown a penchant for animalism in his flute solos. Now taking a wider berth behind the boards, he was able to carry that style over to the other instruments, notably for the electric guitars. The folk sensibilities remain, but they’re subordinated to rock riffs that suggest Led Zeppelin on a lighter scale, especially on the riff-driven To Cry You a Song and Son.

To the dismay of some, Anderson was also growing more indulgent in his lyric delivery, dripping with disdain on Nothing to Say and Play in Time. In many ways, he was becoming the Frank Zappa of folk/rock, creating intricately knotted ribbons of music on which to hang his effigies. As a result, the remaining pockets of youthful innocence (Inside, For Michael Collins, Jeffrey and Me) now sound disingenuous and out of place, the first casualties of the new Jethro Tull.

To balance the darkness, Anderson would come to rely on humor to rise above the fray he’d made. Teacher, for example, with its clockwork precision, is part of a select company of Tull songs that pokes fun at philosophizing (c.f. “Fat Man,” “Thick As A Brick edit #1”). The album ends with the semi-colonnaded Sossity; You’re A Woman, an acoustic wonder that holds its own with the best of them (including the first half of “Stairway To Heaven”). Benefit affords the listener their choice of the hot sun or cool shade—that is, without the inhospitable heat of a bright concept hanging over their heads. Some saw it as the end of the line, others the beginning, making it one of the few Tull albums most fans can agree to enjoy.

All selections written by Ian Anderson.
*Replaced with “Alive and Well and Living In” on the UK version.