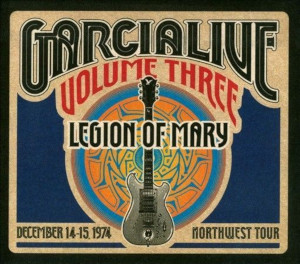 The Legion of Mary recordings are sort of a mixed blessing. On the one hand, you have songs that you rarely hear from Jerry Garcia, like “Freedom Jazz Dance” or “Valdez In The Country.” On the other hand are songs from Merl Saunders that you’ll probably never want to hear again, like a version of “Boogie On Reggae Woman” in which the man literally manages to sing and gargle at the same time. Legion of Mary wasn’t a band so much as a pseudonym for the collaborations between Jerry Garcia and Merl Saunders that took place during the Seventies—in this case, between the winter of 1974 and the summer of 1975 while Garcia took a break from touring with the Grateful Dead. Legion of Mary never made a record and survives today only in archival releases like this, which makes these releases important to collectors. The third volume in the GarciaLive series captures the band during two days in Oregon at the Paramount Theatre (Portland) and the EMU Ballroom (Eugene). In addition to Garcia and Saunders, the Legion featured sax/flute player Martin Fierro, John Kahn and Ron Tutt. It would be nice to say that they’re all equal collaborators in the end, but that would be a lie; Garcia’s guitar solos are definitely the draw. That said, I don’t hear where Garcia’s playing is any better or more adventurous here than on any other outing. What makes this collection interesting is the material and, to a lesser extent, the contributions from Fierro, who appears here as an added flavor to the standard Garcia/Saunders pairing. The first disc features the Paramount Theatre performance and, honestly, it’s a snooze. Hearing Garcia sing “Dixie” is a treat, but the backing vocals (presumably from Saunders) are waayyy off key. The instrumental “Freedom Jazz Dance” is adventurous (shades of Space), the closing set of “Mystery Train” and “How Sweet It Is” old hat at this stage. Apparently, the band learned nothing from the previous night, and leads off the EMU Ballroom show with another song from Saunders, Randy Newman’s “You Can Leave Your Hat On.” (Saunders later recorded this and “Boogie On Reggae Woman” for his album, You Can Leave Your Hat On, which also featured Fierro.) Garcia takes the microphone for a country-stompin’ version of “Neighbor, Neighbor” and wraps up the first set with a return to “Dixie” (this time without the backing vocals). The second set features the familiar (“It’s No Use,” “I Second That Emotion”) with rarely heard Garcia performances of “Valdez In The Country” and Saunders’ “Wondering Why.” That last track is one of the show’s highlights, featuring decent vocals from Saunders (apparently, someone gave him a throat lozenge between sets) and Fierro on flute. The night ends with a rollicking version of “Roadrunner.” All in all, the Ballroom tops the Paramount and stands as one of the better Garcia/Saunders performances I’ve heard (admittedly, I’ve only heard a few). I would think you could live a full life without hearing Garcia and Saunders play together even once, though I’m sure many Deadheads would beg to differ. If you’re determined to go down that road anyway, GarciaLive is an interesting avenue to explore for a few hours, but you might want to leave your hat over your ears when Saunders takes the microphone.