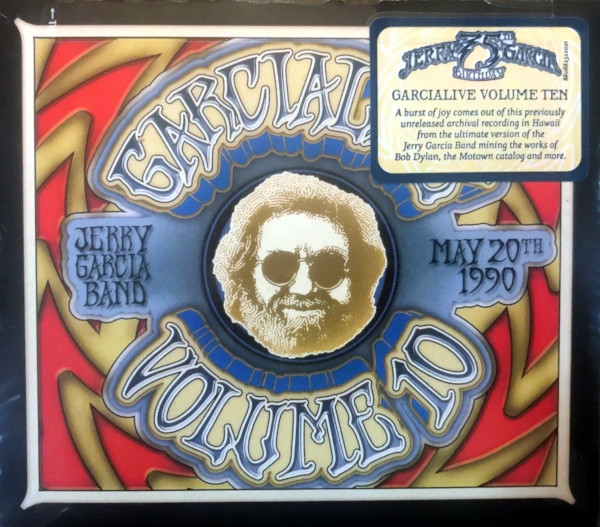 A live recording of JGB at a 1990 benefit concert in Hawaii, in case you’re in the mood for a poi man’s Dead.

What’s better than being in Hawaii? Being in Hawaii at a Jerry Garcia concert. The tenth in the GarciaLive archival series captures the Jerry Garcia Band in Hilo, Hawaii in the early summer of 1990. More than a touch of grey had crept into Jerry’s voice at this point, although fans had long since accepted the fact that his voice gets raspier as the night wears on. The backing vocalists help some; the guitar and organ help more. And, of course, there’s always Jerry’s tasteful selection of old and new material to keep things interesting.

The first half of the show gets off to a great start with a strong version of How Sweet It is (To Be Loved By You), a song Jerry has played about a billion times (give or take a few million). He doesn’t wait long to dig into Bob Dylan’s treasure chest, pulling out a relatively obscure track from Planet Waves, Tough Mama (one of my personal favorites from an album that isn’t a personal favorite). What follows is a mix of spirituals (Like A Road Leading Home, Brothers And Sisters), Motown (The Way You Do The Things You Do) and selections from Jerry’s solo albums (Deal, Run For The Roses, Knockin’ On Heaven’s Door, They Love Each Other). All in all, the hour passes easy, and I always enjoy hearing “Deal” played in its swifter version and Jerry’s reggae interpretation of “Knockin’ On Heaven’s Door” (which first appeared on Run For The Roses).

The second half of the show is all covers, including a pair of contemporary songs from Los Lobos (Evangeline) and Bruce Cockburn (Waiting For A Miracle). You’ll encounter three more Bob Dylan songs here (Forever Young, Tears of Rage, Tangled Up In Blue), reggae (Stop That Train, The Harder They Come) and a couple of oldies (Tore Up Over You, That Lucky Old Sun). “Tears of Rage” isn’t something you hear from Garcia every day, although I have to laugh sometimes when I see how much meaning critics have attached to Bob Dylan’s lyrics. In Robert Hunter’s lyrics, critics went looking for themes, but with Dylan they pored over every word for meaning. (Sorry, kind of went off on a tangent there.)

With the Grateful Dead/Jerry Garcia archival releases, it always comes down to a question of how much Dead you really need in your life. If you’ve seen more than a dozen Dead shows then, yeah, you won’t be disappointed with GarciaLive Volume 10. Jerry’s voice is in pretty good shape and his fingers are in fine form, while Melvin Seals surprises in more than a few spots. The rest of the Jerry Garcia Band is predictably solid, but flashy they’re not. As for taking this on a desert island, I wouldn’t unless you’re planning to make a hut out of plastic compact discs.

Design and illustration by Ryan Corey. Photos by Bill Smythe.