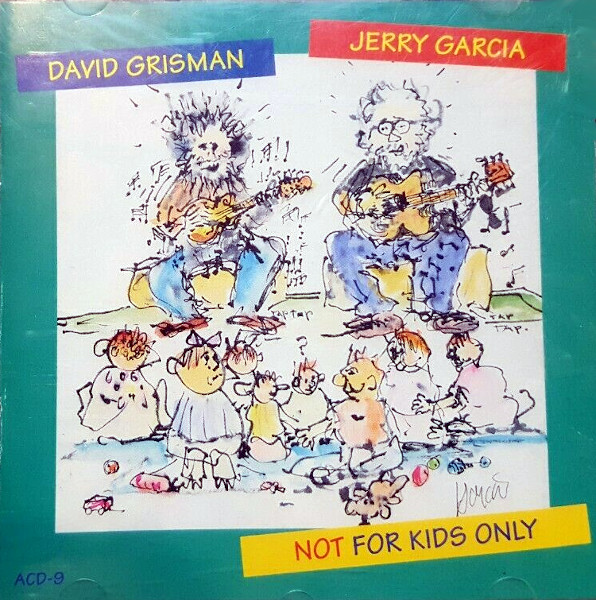 Before Garcia freighthopped to the great beyond, he stopped to play with an old friend one last time.

David Grisman and Jerry Garcia first met in the 1960s at a folk concert. “Dawg,” as Garcia dubbed him, has been a frequent collaborator in the constellation of the Dead star ever since. In 1975, the pair appeared as part of the bluegrass project, Old & In The Way. In 1991, they recorded the Grammy-nominated Garcia/Grisman, featuring a mix of traditional folk songs and originals. Not For Kids Only is the second album to bear both their names , released on Grisman’s Acoustic Disc label. Patterned after the New Lost City Ramblers album, Old Timey Songs for Children (released in 1959), the album features performances of songs from the NLCR catalog including “Freight Train,” “Hopalong Peter,” “No Bugs on Me” and “Hot Corn, Cold Corn.”

Now, the difference between progressive bluegrass and progressive rock is the difference between earth and sky. Yet I never listen to Garcia’s bluegrass music without realizing how much it informed the music of Grateful Dead. The folksy wisdom, sense of humor, sweet melodies and instrumental interplay (particularly on their acoustic songs) all point back to bluegrass. Which is to say that, if you enjoy the acoustic music of the Dead (e.g., Workingman’s Dead), you’ll enjoy Garcia’s bluegrass ramblings too. Bob Dylan’s music had the same grass roots connection to American folk music, and partially explains why Garcia was fascinated by the music of Dylan.

The title Not For Kids Only is a kind of double, double entendre. It refers to the fact that the music can be enjoyed by children and adults alike. But the title can also be applied to the album’s raisin debtor, as it served as both a fundraiser for the Carousel Fund (created to help families in Petaluma, California facing high hospital bills for their child’s illness) and a fun album of new music for fans of both artists. Unlike the earlier Garcia/Grisman album, which was recorded as a quartet, this album features mostly Garcia and Grisman with minimal accompaniment from guest musicians.

Over the last several days, I’ve really enjoyed listening to this album. It’s a kind of musical American history lesson featuring folk songs that have been enjoyed by generations. Strange as it sounds, I pity the next album I listen to. It will feel overly serious and overproduced. The songs on Not For Kids Only flow easy: “Freight Train,” “Hopalong Peter.” They’re silly: “No Bugs on Me,” “A Horse Named Bill.” They’re deeply felt: “Freight Train,” “Shenandoah Valley.”

Grisman and Garcia are the good guys. While much of the work of preserving the music of America’s past has fallen to the Smithsonian, musicians like Grisman and Garcia have kept the past and its spirit alive in modern-day recordings like this. Listening to this record is like stepping back in time and stepping into a small room where Grisman, Garcia and their friends are playing for your (and their) pleasure. The time passes quickly as you realize that music doesn’t need to be plugged into modern music-making machinery to move your feet or provide a diversion from the worries of the world. Everything you need is right here: a couple of friends to sing and play and pass the time away in America’s pastime.

All compositions arranged and adapted by Jerry Garcia and David Grisman from traditional old-time music and folk songs except where noted.