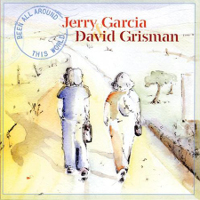 In the last years of his life, Jerry Garcia sat down with the David Grisman Quintet to play and sing american country and folk songs, many of which he had never recorded before. These songs are captured on Garcia/Grisman (1991), Not For Kids Only (1993), Shady Grove (1996) and, finally, Been All Around This World. Although this is the last disc in the series, BAATW is not a case of Dawg’s dregs. Garcia’s reading of Bob Dylan’s “The Ballad of Frankie Lee And Judas Priest,” for example, or the dire mining song “Dark As A Dungeon” are some of the better fruits of the union between the guitarist and the mandolier. Jerry Garcia’s voice had grown worn and weary with age, but it still sounds better in the studio than it did on stage, where the pressures of touring took its toll. Here, Grisman’s mandolin and Garcia’s guitar seem evergreen and ever-willing to bound along the black dots for one more song. If you don’t enjoy the acoustic side of Garcia, then some of this may sound like hillbilly music (e.g., “Drink Up And Go Home,” “I’m Troubled”). And I’m sure there are cynics who see these recordings being made in the interest of profit rather than posterity. But I for one would tell you my world is a little richer for having heard them. All of these stolen moments are ripples in time, really, and you can blink them out of existence or watch them go by in wonder. If you blinked the first time, keep your eye out for these Grisman/Garcia recordings, and you might just find yourself back home again.