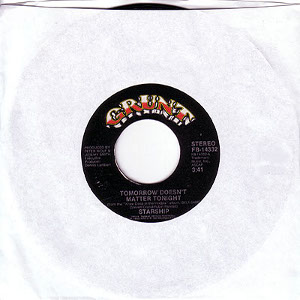 Starlog 10.2: ANOTHER HELLMARK MOMENT. Somewhere in a diabolical Brill Building, lyrically inclined lemurs craft soulless songs designed to erode what little decency remains in the world above. That would explain how a “Tomorrow Doesn’t Matter Tonight” comes to be, the squalid offspring of some febrile mind in Hell’s Hallmark Moments kitchen. I can’t think of a more reckless sentiment than “tomorrow doesn’t matter tonight,” unless someone finds a way to craft a melody around the words “I’m sure they check them at the condom plant.” The B side comes courtesy of Bernie Taupin and Martin Page and features the opening insight that “Love rusts when it rains on romance,” which would literally mean “Love rusts when love rains on romance.” Obviously, someone is rusty.

The PIcayune
> Before becoming a songwriter, Steven Cristol was a marketing consultant—a role he returned to, writing the book Simplicity Marketing with Peter Sealey in 2000.
> The video was directed by Francis Delia, who had earlier directed the Weird Al Yankovic video for “I Lost On Jeopardy.”