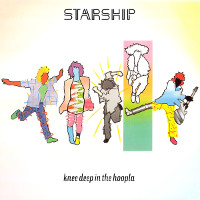 Starlog 10.0: A WOLF IN SHIP’S CLOTHING. Kaptain Kantner abandoned ‘Ship after Nuclear Furniture. David Freiberg freaked when it became clear that Peter Wolf was running the show. So what was left for the remaining members of the now-shortened Starship to do but stumble into a second miracle? Not since Red Octopus had the Starship brand enjoyed commercial success on this scale. Knee Deep In The Hoopla spawned two #1 singles: “We Built This City” and “Sara.” The first has often been cited as one of the worst songs from the 80s, but it really is an amazing piece of product. (Negative reaction likely has as much to do with the fact that MTV overplayed the video because of a general dearth of music videos. It’s a wonder people can still listen to Peter Gabriel’s “Sledgehammer.”) That the band relies almost completely on outside songwriters is a disappointment, but the songwriters themselves aren’t disappointing: Bernie Taupin, Michael Bolton, Kimberley Rew, Peter Wolf. With top-shelf material and a competent band to play them, Wolf set about adding layers of synthesizers to create an immaculate-sounding pop record. Yes, it has absolutely nothing to do with the psychedelic and groundbreaking work of Jefferson Airplane. Neither did Red Octopus, Spitfire or anything after. Jefferson Starship was always a commercial enterprise, and the wonder of Knee Deep In The Hoopla isn’t that the band has completely sold out, but that they waited so long to do it. Peter Wolf deserves a lot of credit for turning a recipe for rock disaster (a band without a leader, professionally penned songs) into a runaway success. The hoopla surrounding the album at the time likely turned a lot of people off, but there’s little denying that, song for song, this is one of the best albums that Starship (in any guise) has released. That is, by the way, what we in these parts call a back-handed compliment. I’ll pick Airplane over Starship every time, and would suggest you spend your Jeffersons accordingly.

The Plastic
Originally released on elpee, cassette and compact disc on October 1985 in the US (Grunt, BXL1/PCD1-5488) and UK (RCA); reached #7 on the US charts (RIAA certified platinum on December 27, 1985). Re-released on CD on September 1989 in the UK. Art & design by Ted Raess/Raess Design; photography by Bill Robbins.