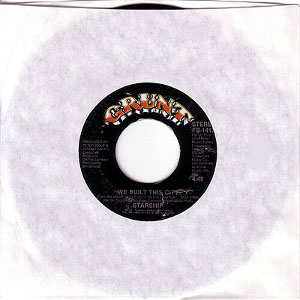 Starlog 10.01: STARSHIT. They were knee deep in something alright. Here was a song that purported to be an anthem against faceless corporate crap, yet stank up the airwaves with its blissfully ignorant irony. At the time, I really hated this song, but it doesn’t rankle me so nowadays. They say you get more mellow with age, or more Mallomar-y or something like that. Apparently, the rest of the world doesn’t forgive so easily. Blender’s readers ranked this the worst song of all time. Rolling Stone’s readers ranked it the worst song of the 80s—and, presumably, in a separate poll ranked the 80s the worst decade of all time. In a separate, separate poll, Blender readers secretly admitted to also reading Rolling Stone. So many polls and so few places to put them… The B side isn’t so bad: a funky instrumental written by actual members of the band that reminds me of The Tubes and appeared on Starship’s first album, Knee Deep In The Hoopla.

The Players
Starship’s #1 single was actually constructed by an infamous assortment of songwriters (aka the ascap of evil): Bernie Taupin (known to millions through the songs of Elton John), Martin Page (known to the five people who bought Bernie Taupin’s Drive), Peter Wolf (already known to Jefferson Starship fans) and Dennis Lambert (known to rednecks for his work with Glen Campbell).