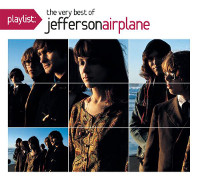 Kronomyth 16.8: GREEDY HEART. This is where I rant about how Sony is just trying to rip people off with product, and how The Essential Jefferson Airplane covered all of this and then some, and how sugar bags and ice cream containers are getting smaller, or whatever it is that cranky old people complain about when they don’t really have anything to complain about. The Playlist compilations I’ve heard are actually pretty good. Granted, I think I’ve only other heard the Living Colour one, but of the two Playlist compilations I’ve played, they were both pretty good. Sony had released a Playlist compilation for Jefferson Starship just one year earlier (kind of weird that they’d do that one first); this Playlist focuses on the Jefferson Airplane from the beginning to Bark. Presented in chronological order, the selections are smartly picked, featuring all of the singles that charted and some of the ones that didn’t, plus half of Surrealistic Pillow. Anyone who buys this looking to hear Airplane in their original psychedelic setting will get an earful and an education. The packaging isn’t much to look at (I guess they were trying to save the environment or save money so they could spend it on saving the environment), but the sound quality is clean (bearing in mind that the original Airplane was always murky in intent) and, like I said, nice choices across their catalog. Super Hits; now that was a piece of crap.