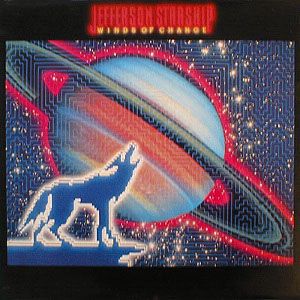 Kronomyth 8.0: CHANGE IN LIEDERSHIP. Grace Slick was more engaged for Winds of Change, but any notion that she and Paul Kantner were back at the controls of the Starship was quickly dispelled by a look at the songwriting  credits. Craig Chaquico and husband-and-wife team Jeanette and Pete Sears had become the dominant creative voices in the band, steering the Starship closer to the radio-friendly sound of Toto and Journey. At this stage, Kantner is more of an honorary captain, allowed to grow long in the tooth for a couple of spacy excursions but no longer counted on to steer the band through the shallow 80s. Kantner and Slick can still kick up some dust; their response to punk, “Out of Control,” is a highlight. And Grace has got a pair, giving no more quarter to Mickey Thomas than she did Marty Balin. Yet this might be the lamest Starship album so far. REO Speedwagon producer Kevin Beamish was brought in to help the band sell records, not silence critics. I’d say anyone who could make Top 40 hits out of “Be My Lady” and “Winds of Change” knows what they’re doing behind the boards. But no one on board the Starship is a balladeer of Balin’s stature, and the sharp edge of songs like “Ride The Tiger” and, more recently, “Jane” has been dulled down to the soft studio rock of “Keep On Dreamin’” and “I Will Stay.” A Jefferson Starship without any teeth bites more than you’d think. Better, in my opinion, is Paul Kantner’s Planet Earth Rock And Roll Orchestra, which finds Kaptain and krew sailing into deeper waters.

The Plastic
Originally recorded at The Automatt in San Francisco and released on elpee and cassette on October 1982 in the US (Grunt, BXL1/BXK1-4372), UK (Grunt/RCA, 6060) and Japan (Grunt, RPL-8159); reached #26 on the US charts (RIAA certified gold on July 31, 1995). The original elpee featured a lyrics innersleeve. Re-released on CD in the US (RCA, 4372). Cover painting by Andreas Nottebohm, album design by Dyer/Kahn, Inc. and special effects photography by Paul Tokarski/Visual Promotions, Inc.