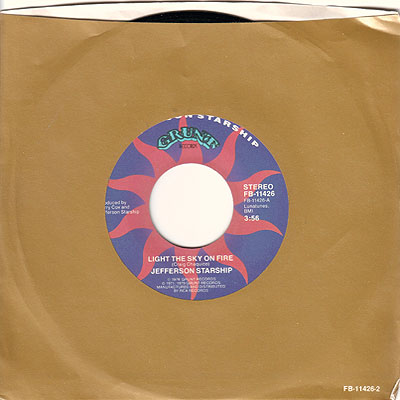 Yes, Virginia, there really was a Star Wars Holiday Special and the only kind thing I can say about that is the merciful absence of Ewoks. Oh, and it had a video of Jefferson Starship (minus Grace Slick) playing “Light The Sky On Fire,” which premiered on the special before catapulting up the charts to number 66. Written by Craig “light my hair on fire” Chaquico, the song is a rare case of Marty Balin in the role of psychedelic stargazer, who manages to be nearly as menacing as Eric Bloom. The nonalbum B side, “Hyperdrive,” is even more proggy, with a guitar/violin attack that’s almost Crimson in effect. The 7-inch single was also included with the 1979 greatest hits compilation, Gold (which is the orphan I own, known by its gold sleeve).

The Players
Both songs were produced by Larry Cox and Jefferson Starship, and as such mark the end of an era that started with 1974’s Dragon Fly.