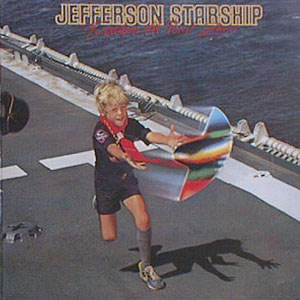 Starlog 6.0: WOW, MAN’S LIBERATION. Kaptain Kantner returns to the helm of the Starship; Marty Balin, Grace Slick and John Barbata bailed. Instead of spelling the end of the Starship, Freedom At Point Zero turned out to be their best album, at least from a prog/rock fan’s perspective. Mickey Thomas replaced the two-headed beast of legend, while The Aynsley Dunbar inhabited the traps. The singing change isn’t as troubling as you’d think, since Mickey Thomas sounds like a woman half the time anyway; Dunbar is an upgrade wherever he goes. And the Starship finally found a full-time job for David Freiberg (bass) and Pete Sears (keyboards), which allows Sears to settle into the synth role and deliver some of his best work to date. Any discussion of Freedom At Point Zero begins with “Jane,” its disco bridge notwithstanding the best rock song they’ve written since “Ride The Tiger.” Kantner’s “Girl With The Hungry Eyes” was an unlikely hit, Craig Chaquico’s “Rock Music” should have been one too. But for prog fans, it’s “Awakening” that’s likely to open eyes. I usually take pains to point out that Jefferson Starship is not a prog band, but this track would have felt right at home coming from Kansas. The rest of the record is solid, from the BOC soundalike “Just The Same” to the small amount of celestial magic found in “Things To Come.” Maybe it’s the extra testosterone, but Freedom rocks harder than any Starship album, period. Unfortunately, the band returned to its orbit around the ego of Grace Slick soon after, and what seemed like freedom turned out to be only a boys’ night out.