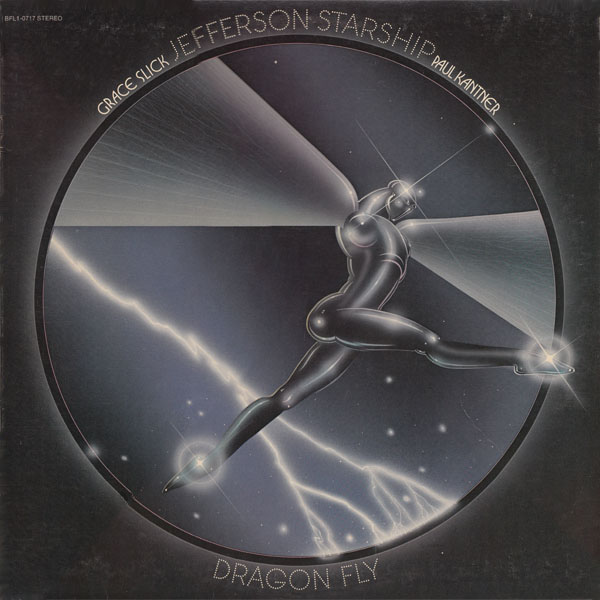 As the Airplane was winding down, Paul Kantner and Grace Slick went off to record solo albums that loosely collected a lot of the same players, so that you could reasonably argue their solo records were really just extensions of the Airplane’s journey. In 1974, the pair decided to create a new vehicle using the available Airplane parts–John Barbata, Papa John Creach, David Freiberg–and round it out with then 20-year-old guitarist Craig Chaquico and multi-instrumental Englishman Pete Sears, both of whom had appeared on Slick’s most recent solo album, the unfortunately titled Manhole. Co-credited to Kantner and Slick, Dragon Fly featured eight tracks of partly mystical and partly mainstream rock. The album went gold on the strength of songs like “Ride The Tiger” and “Caroline,” the latter featuring a briefly returning Marty Balin on vocals. A reader of Progrography once asked me if I thought Jefferson Starship was a progressive rock band, and I would nix the notion here. A lot of classic rock bands, many of them formed in the psychedelic ‘60s, were pushing artistic envelopes that sometimes got mailed to strange and exotic destinations: Santana, Grateful Dead, CSN, The Doors. San Francisco, nexus of the hippie stoner bands, nurtured an experimental environment where music was written to transcend the real. As Paul Kantner sings on the opening ride, “We got something to learn from the other side.” And while Dragon Fly does feature some musical flights of fancy (“Hyperdrive,” “Devils Den”), it’s felicity not alice aforethought. Put enough talented musicians together, some of whom have an artistic or mystical bent (Kantner, Slick), and you’re bound to detect the scent of prog in the air from time to time. But Jefferson Starship is just a part of the California Dream that embraced drugs, spirituality, youth, love and music. As with a lot of 70s rock bands (Santana, Eagles, Blue Oyster Cult), endless songwriting permutations exist, including collaborators outside the proper band (Robert Hunter, Tom Pacheco), which makes Dragon Fly a hard album to pin down stylistically. A magnum opus it isn’t, but so long as you don’t come after this expecting any Miracles, Dragon Fly is worth netting.

The Pictures
Cover illustration by Peter Lloyd (who also designed album covers for Rod Stewart and Kansas), with art direction by Acy Lehman and Frank Mulvey.