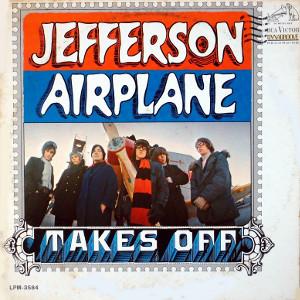 Marty Balin is your captain, Signe Anderson is your air hostess, and it’s blues skies ahead for thirty minutes. Next stop, San Frantastic.

Folk music was fueling a psychedelic revolution that produced an exciting new sound but few viable heroes for rock and rollers. The Byrds seemed poised to bring rock fans with them into the psychedelic era, then quickly turned into a country/rock band. The Mamas and The Papas were little more than a hip version of Peter, Paul and Mary. Sonny and Cher were, well, Sonny and Cher. Then Jefferson Airplane arrived on the horizon. Here was an actual psychedelic rock band. They played the blues, jammed their two- and thee-minute sounds with creative instrumentation and had one of the best bass guitarists this side of the Atlantic in Jack Casady. (He and Jack Bruce were a pair of Jacks for the ages.)

Marty Balin, the Airplane’s original captain, wisely salvaged the best parts of the psychedelic scene (ringing guitars, male/female vocal harmonies, free love imagery) and fit it with a powerful blues/rock engine led by Casady, Kaukonen and Kantner. In a sense, Jefferson Airplane was to the psychedelic scene what The Rolling Stones were to The Beatles: a guerilla force that liberated its beloved music from the machine and returned it to the masses.

Their debut, Jefferson Airplane Takes Off, is an amazing debut. Every song seems essential, every drop is received like manna in a new world of sound. Of course, everything would change in a year or two, and the heights reached here would be eclipsed by “White Rabbit,” Cream, The Velvet Underground, etc. Grace Slick would expand the role originally played by Signe Anderson and the songs became longer, more experimental and more controversial. Compared to their later albums, songs like “It’s No Secret,” “Blues From An Airplane” and “Come Up The Years” have a certain innocence to them. At the time, however, this was radical and revolutionary stuff, which just goes to show how fast music was evolving in the second half of the 60s.