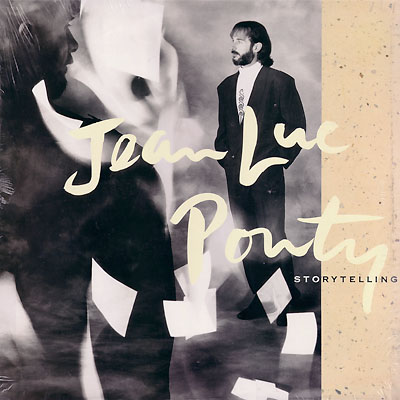 I’m a collector. If I like an artist, I’ll buy their body of work limb by limb. Not that I’m prepared to pay an arm and a leg for an album like Storytelling, but if I find it in a used record store for a few bucks, it’s going back to the lab with me. However, it’s a reflexive act more than premeditated self-medication. Somewhere in the mental associations of my mind is Folder P for Ponty with a little smiley face on it and a hand-written note that reads “progressive rock.” It dates back to Mystical Adventures mostly, the first Ponty album I ever owned. The same thing occurs with Chick Corea, having first purchased Romantic Warrior, and I’ve got a few latter-day lurchers to thank for that knee jerk. The old associations don’t die, they just grow dimmer with every album of smooth fusion that drifts further from the fantastic world of progressive rock. Now, Ponty was never a progressive alchemist so much as a jazz musician who saw electronics as a path to progress. A mystical and adventurous notion in the ‘70s, not so much at the close of the ‘80s. His plugged-in period sounds alike to me: part geometry, part kaleidoscope, all of it advancing the notion that the electronic violin is a viable vehicle for modern jazz. In album-size doses, his music is a refreshing island of intellectual escape. However, each of the islands offers the same basic fare; if Rabbitson Crusoe taught us nothing else, it’s that no menu is an island. Me, I’ve heard this story too many times to be captivated anew by it, but (apparently) not everyone has a saturation point for Ponty.

All music composed and orchestrated by Jean Luc Ponty unless noted.