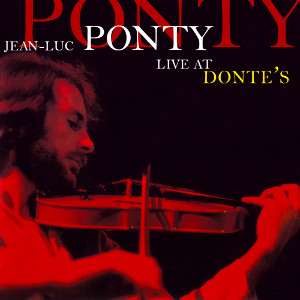 When Dick Bock arranged for the Duke and Ponty dog-and-pony show at Thee Experience in the Fall of 1969, there was one little problem: no piano. So George Duke had to play the songs on an electric piano, and the rest is history. Twelve years later, listeners got a taste of what the evening should have sounded like with Live At Donte’s. Recorded in the Spring of 1969, the original Blue Note elpee featured four tracks that were part of Ponty’s repertoire at the time but had not been selected for the vinyl Experience. As much as I associate Duke with the electric piano, he is a fiend on the acoustic piano, turning in great performances on songs like Ponty’s “California” (from More Than Meets The Ear). In fact, these early records with Ponty provided great exposure for Duke as well. In this acoustic setting, John Heard is better heard (he’s a far better bass player than Experience would indicate), although drummer Al Cecchi is undermiked. The selections presented here are enjoyable: a pair of originals from Ponty’s last two albums, a Miles Davis song (“Eighty-One” from E.S.P.) and “People,” which Barbra had recently reprised for the film, Funny Girl. The performances are livelier than what you’ll find on Electric Connection, the interplay between Duke and Ponty more spontaneous and creative. At the time of its release, Live At Donte’s was strictly a supplemental release; something to add to your personal Ponty museum, but not an essential recording. These days, however, I would tell you that Donte’s is a place I return to more often than Sunday Walk or Electric Connection, and in fact may be the best way to experience Ponty’s early acoustic phase when you consider the expanded version released in 1995. That disc essentially includes an acoustic version of The Jean-Luc Ponty Experience as a bonus, featuring live recordings of “Foosh,” “Pamukkale” and “Cantaloupe Island,” plus a brief tip of the chapeau to fellow French composer Michel Legrand’s “Sara’s Theme.” The infernal machinations of record companies aside (e.g., the misleading cover), the expanded version of Live At Donte’s is a pleasant trip back in time.