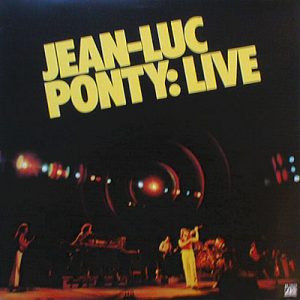 Featuring one selection each from his last four albums, plus the amazing solo showcase of “No Strings Attached,” Live offers a lively summation of Ponty’s recent oeuvre. (As in, “We had a lovely evening, we’ll have to have your oeuvre some time.”) It opens with both ends of Aurora, and lets the early spotlight linger longer on bassist Ralphe Armstrong, who amazes with his outpouring on “Aurora Part II.” In fact, Jean-Luc Ponty proves an equal opportunity employer with solos for everyone save Scheuerell. Ponty’s double-guitar sextet (which now included Jamie Glaser on rhythm guitar) was a short-lived experiment begun with Enigmatic Ocean and ending with his next elpee, A Taste For Passion. Often the keyboards and guitars get swirled together into a single line of communication, punctuated by the rhythm section of Armstrong and Scheuerell. While Ponty’s music doesn’t allow for a ton of improvisation/interpretation, like all jazz it sparkles in a live setting. The record’s highlight is the one-man performance of “No Strings Attached,” which uses digital delays and a sequencer to turn Ponty’s violin into an exotic world of sounds. While it’s atypical of his music, “No Strings Attached” might be the best introduction to Ponty’s muse, as it shows off both the musical possibilities of the electric violin and the imagination of the person playing it. The gang returns for a fiery version of “Egocentric Molecules” (one of the better tracks from Cosmic Messenger) where the strings of Ponty, Lievano and Armstrong just singe the senses. Single-record live albums are usually a tease, but with Jean-Luc Ponty: Live you’re getting the best bits up front. If you’re unfamiliar with his work, don’t be afraid to start here.

The Pictures
Photos by Armando Gallo.