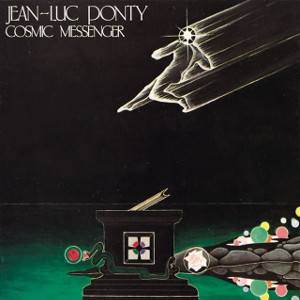 Jean-Luc Ponty continues to plumb his pleasant brand of fusion on Cosmic Messenger, keeping at its core the tight, circular patterns found in most of his work from this period. While there are a few tracks that stand out—the mesmerizing title track, the sentimental “I Only Feel Good With You,” the spiritual “Ethereal Mood”—most are indistinguishable from the bulk of his Atlantic output. While Ponty has toned down the violin solos, replacing them with guitar solos from Peter Maunu and Joaquin Lievano in many cases, the decision to keep the rest of the band bound to the same small circumference of music limits their impact. “Egocentric Molecules” does break things open, allowing Ralphe Armstrong and new drummer Casey Scheuerell to flex their muscles. The same can’t be said for “Don’t Let the World Pass You By,” “Fake Paradise” and “The Art of Happiness,” which are based in some cases on nothing more than a couple of notes seesawing back and forth. With the violin and guitars taking the lion’s share of the solos, keyboardist Allan Zavod recedes further into the background, which is something of a shame. Cosmic Messenger is enjoyable and engaging—really, all of Ponty’s albums are to a large extent—but like an animal on a leash it seems unable to stray for any length of time from its established idiom. Whether Cosmic Messenger is deemed consistent or redundant depends on your saturation point for Ponty’s music. Honestly, the tracks represented on the double-disc compilation Le Voyage are probably as much of this message as you need to hear.