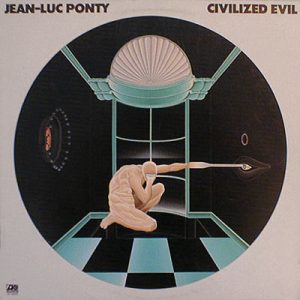 More mildly intoxicating music from the violin virtuoso. Civilized Evil introduces Randy Jackson and Chris Rhyne into the fold, both of whom quickly become assimilated into the organism that is Ponty’s music. The song titles suggest the theme of a world gone wrong, which might lead to avenues of speculation if you’re so inclined. However, this is not program music in the usual sense where the music takes a linear course. Instead, Ponty’s music mostly chases its own tail, beginning with a catchy riff and expounding on it for four or five minutes. In the middle of each you’ll find a violin solo, a guitar solo (Sturmer’s two are more rock-oriented than Lievano’s leads), and an island of exposition that takes the original theme in a new direction only to return again. The Atlantic years represented a refinement of Jean-Luc Ponty’s fusion from sometimes complex epics into self-contained parcels. On subsequent albums, the violinist would explore sequencer patterns as well, the likes of which are achieved here in an analog mixture of guitar and keyboard on “In Case We Survive.” Though the opening “Demagomania” was issued as the single, the standout selection may be the closing “Once A Blue Planet,” the album’s lone acoustic track. It’s a sad song, lovely of habit, and even a little hopeful. The remaining songs are what you’d expect from Ponty at this point, which is something of a disappointment to me. Maybe the deficiency is mine, a too-ready tendency to file all the violin notes into the same folder. Or maybe Ponty really is writing the same song over a hundred times in his head. Whether you view him as consistent or resistant, Ponty’s posies go down easy. Civilized Evil is merely a middle-packer, good but not gregarious enough to stand out in the field. It’s not a bad place to be, shoulder-to-shoulder with works like A Taste For Passion and Cosmic Messenger, but less startling than an Imaginary Voyage or Mystical Adventures.

All selections composed and orchestrated by Jean-Luc Ponty.