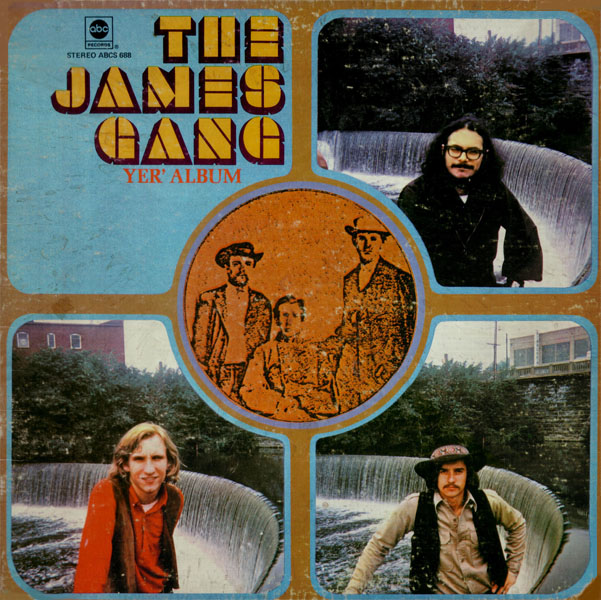 Just yer usual blues-rock power trio, this time with rural sensibilities and a little sensimilla in the mix.

The James Gang were a psychedelic blues power trio modeled more on Hendrix than Cream, but lacking the high-stakes skills of either outfit. Their debut album, produced by a young Bill Szymczyk, is typical of the psychedelic rock albums from the period: studio in-jokes, spoken asides, incorporeal interludes, inscrutable lyrics and some blistering blues-rock guitar to ground it all. Although the Gang was founded by Jim Fox, Joe Walsh is their focal point: he sings, plays guitar and organ, writes most of the original material and is at least a level above the ability of Fox or bassist Tom Kriss in terms of chops.

Honestly, most of the bands in this genre/time-space (Steve Miller, Rhinoceros, Steppenwolf, Vanilla Fudge, etc.) were too busy burning incense to the blues-rock gods of their elevated imaginations to make consistently good music and too high to notice the difference between experimentation and mental masturbation. Not surprisingly, The James Gang are most effective here when they stop trying to construct their own stairway to hippie heaven and let Walsh jam off of other people’s platforms. Buffalo Springfield’s “Bluebird,” Yardbirds’ “Lost Woman” and 12 minutes of a seemingly unstoppable Walsh joined by Jerry Ragavoy on his “Stop” are highlights of Yer’ Album.

The originals are occasionally quite good (“Collage,” “Funk #48,” “I Don’t Have The Time”), but after forty years they’ve settled into the substrata of psychedelic rock, where their fungal pungency is more suitable for growing mushrooms than building temples of legend. That said, the inspired soloing on “Stop” clearly warranted an encore. Rather than a lost rock classic (as some would have you believe), this is simply the dirt and dust of lost ages, notable mostly as an early and ambitious flight from a pair (Walsh, Szymczyk) who would rise to greater heights with Eagles. [Super secret squirrel note: “hidden” spoken messages appear at the end of side one (“Turn me over”) and side two (“Play me again”) if you let the needle go to the end.]

Arrangements by The James Gang and Bill Szymczyk.