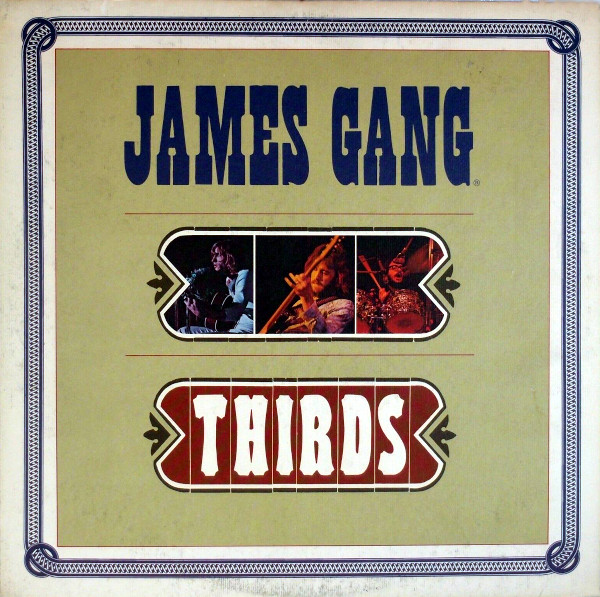 The last album before Joe Walsh rode off into the solo sunset, this one features the prescient “Walk Away.”

The gang’s third album follows the same formula as their last: deliver a killer rock track out of the gate and then do your darnedest not to repeat that feat again. This time, the killer track is “Walk Away,” which I would tell you is even tighter than “Funk #49,” but that’s splitting heirs, as the two tracks are pretty much the sum and substance of James Gang’s legacy. If the band didn’t have any qualms about making the same album twice, they take pains on Thirds not to write the same song twice; I’d be hard-pressed to name another album that sounds so different from track to track.

What emerges on Thirds is a band with very different musical personalities. All three members contributed material on their last album, but this is the first time that members wrote and sang the material on their own. Dale Peters delivers a really sweet country song (“Dreamin’ in the Country”) and a blues song that builds into an impressive crescendo (“White Man/Black Man”), Jim Fox writes two tracks, including the ambitious and surprisingly philosophical album-ender, “Live My Life Again,” and Joe Walsh matches their contributions with four new songs. It turned out to be a good time to advance the personalities of Fox and Peters, as Walsh would leave the band the following year.

Although third albums are often where it all comes together, I would say that Rides Again is the tighter album because it rocks more consistently. On Thirds, the band brings in the sort of orchestral arrangements not normally associated with rock bands (unless they’re named The Beatles) and is guilty of meandering a bit on some of the more ambitious songs (e.g., “Again”). In fact, there are only three songs that technically rock on Thirds: “Walk Away,” “Midnight Man” (which is really more of a romantic pop song, though with tongue in cheek) and “Things I Could Be.” Given how good a rock drummer Jim Fox is (not my impression on the first album, btw), it’s a shame his talents are wasted on tracks like “Again” and “It’s All The Same.” As a kind of compensation, Fox does branch out into organ (“Things I Could Be”) and vibes on this album.

The band’s ambitions are (again) slightly misaligned with their abilities. It seems James Gang wanted to write a hit song, play with an orchestra and change the world all on the same album. They succeed on one of those fronts, but I feel like the orchestrated works here are a step back from what they already achieved on “The Bomber” and “Ashes the Rain and I.” By diffusing their energies in so many different directions, Thirds shows the band to be more than the sum of Joe Walsh’s songwriting abilities, but it’s not the first James Gang album you need to own.

Original cassette version
A1. Walk Away
A2. Things I Could Be
A3. Dreamin’ In The Country
A4. Midnight Man
A5. Again
B1. Yadig?
B2. It’s All The Same
B3. White Man/Black Man
B4. Live My Life Again