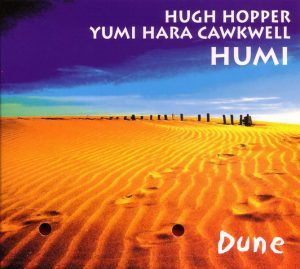 The number of bass guitarists who can tear the fabric of the universe with their instrument is few; count among them Hugh. Here, under the paranormal felicity afforded by the Tarot of Two Lovers, Hopper and avant-garde keyboardist Yumi Hara Cawkwell create disoriental music and soundtracks for fifth-dimensional sculpture gardens. The troll would tell you this is ancient claptrap under new nomenclature, a pocket of air preserved in the rubble of Random since the experimental sixties, but I see the happy accidents of sculpture in Dune. Maybe I’ll create a new character, Sphinx Humi, as both judge of the fourth element (earth) and guardian over the trans-dimensional sculpture gardens that intersect it. The materials used to sculpt Dune’s denizens include bass (both bald-pated and cleverly cloaked), loops (soundscape of the fifth dimension), electric piano (the embodiment of disembodiment) and vocals (space witchery). Cawkwell opts for an organ sound on the two Awayukis, and the result sounds like the Dr. Phibes Jazz Trio. The prog rock label really doesn’t apply here; while a track like “Distant Dune” does invite comparison to the music of Harold Budd and Robert Fripp, HUMI is an exploratory venture, less concerned with advancing music (progression) than obliterating its self-defining borders with a directionless reaching out. And so, on “Scattered Forest,” you have hammered piano notes and streams of space flare. On “Seki,” witches’ chants arc over bass explosions and space echo. Ghost harmonium streaked with ivory seesaws on two fat, flat bass notes to create a pendulum that preponderates its elements on “Circular” (jazz weenies run the world!). However, to describe Dune in words is to shackle it to something small and inflexible. Some of this is simple noisemongering, yes, but there are instances of alien beauty (“Futa,” “Shiranui,” “Circular”) that triumph over the aridity of intellect.