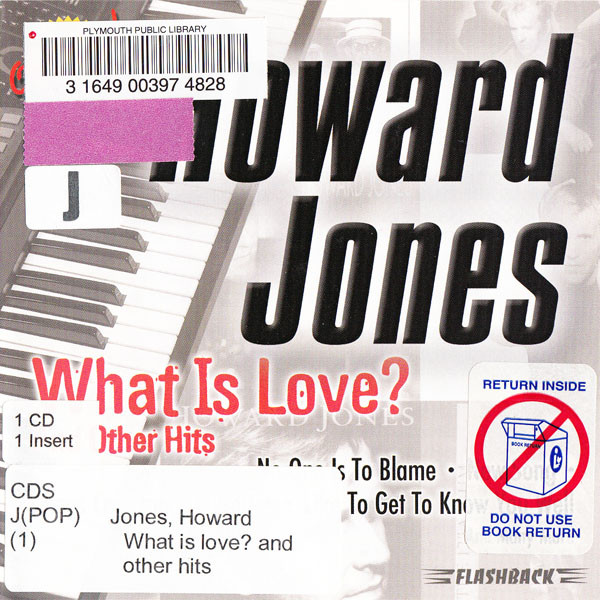 A reduced-price compilation aimed at impulse supermarket shoppers who just heard “No One Is To Blame” on the loudspeaker system.

Kronomyth 11.3: What’s black and white and red in spots?

The original songs you remember by the original artists you love, rendered in the most unoriginal packaging imaginable. The Rhino Flashback Series of discs are simply supermarket impulse purchases, like Devo’s “Whip It And Other Hits” (take that, VH1!) or Bananarama’s “Venus And Other Hits” (which one can only hope contains hits from bands other than Bananarama).

The Howard Jones entry in the series is called What Is Love? And (wait for it…) Other Hits. The good news is that Jones actually had other hits. The bad news is that Rhino only bothered to collect a few of them: the remixed version of “No One Is To Blame,” “Like To Get To Know You Well,” “Things Can Only Get Better,” “New Song.” The other half of the album seems to go out of its way not to include the obvious choices. For example, I was really hoping that “Everlasting Love” would be on here. “Life In One Day” also would have been a more logical choice than “Bounce Right Back” or “Automaton” (here presented as “Automation” because proofreaders cost money and Rhino obviously blew their budget on the design).

The sound quality is fine, so if you see this for five bucks and immediately can’t get “No One Is To Blame” out of your head, then go ahead and buy it. Otherwise, I have to believe that any Howard Jones collection is better than this, as they would presumably a) contain more songs, b) contain better songs and c) be produced with more care and quality than a box of premium plastic spoons.

All songs written by Howard Jones unless noted.