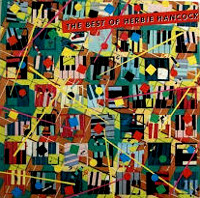 Kronomyth: DA BEST OF DEFUNCT. In the second half of the Seventies, Herbie Hancock put most of his energy into advancing the state of jazz/funk in the world. Initially (i.e., Headhunters), Hancock’s exploration of funk led to one of the more exciting musical adventures in modern music. Over time, however, the experiment began to feel formulaic as Hancock moved his experiment from the laboratory to the dance floor. This compilation provides a brief summary of a very fertile period that included several crossover hits, all of which are included here. You’ll find the insidiously funky “Chameleon” from Headhunters, the lovely jazz/funk hybrid of “I Thought It Was You” from Sunlight, the epic “Hang Up Your Hang Ups” from Man-Child and the indestructible “Doin’ It” from Secrets. Also included here are two tracks from Hancock’s most recent effort, Feets Don’t Fail Me Now: “Tell Everybody” (here presented in its disco mix version) and “Ready Or Not” (replaced by “You Bet Your Love” in the UK, where it was a Top 20 hit). FDFMN found Hancock shifting toward disco music, which has not endeared it to music critics, although there’s little question that Hancock elevates the medium even if the sum result seemed like slumming to some. Although Hancock did release a few more disco albums into the new decade, their achievements are superseded by what’s here. When this compilation was released on CD in the 80s, digital technology was perceived as its own value-add, and so Columbia simply re-issued it with the same six tracks. The decision not to expand on this in the last 25 years speaks to a cooling interest in Hancock’s funk phase. The Best of Herbie Hancock remains a good, succinct entrypoint into one of Hancock’s most creative (if least understood) periods.

The Pictures
Cover art and design by Anne Garner. Back photo by Kaz Tsuruta. Art direction by Nancy Donald.