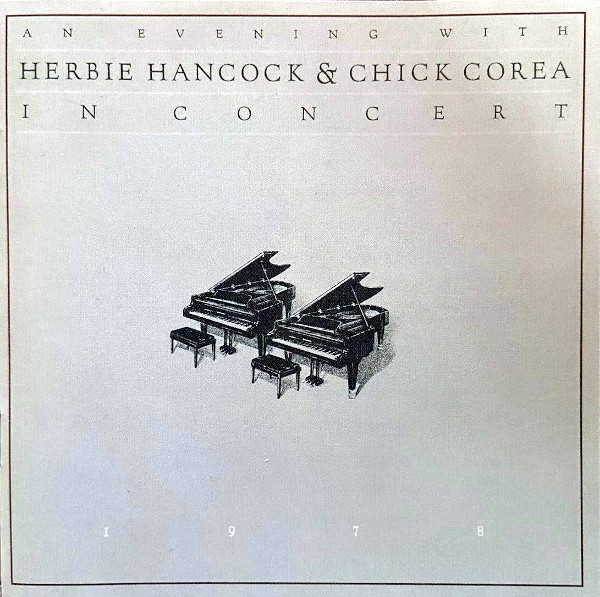 One of two releases culled from the celestial alignment of Chick Corea and Herbie Hancock together on one stage.

On the heels of the successful Very Special One-Time Performance (V.S.O.P.) series, Herbie Hancock teamed up with Chick Corea for a round of concerts in February 1978. The shows were a departure from fusion (their primary musical medium at the time), featuring acoustic piano versions of classics and originals. For concertgoers, it was a once-in-a-lifetime opportunity to hear two legendary musicians make beautiful music together. For those who bought the double-elpee of this and its companion album, CoreaHancock, it was an opportunity to relive the moment without the risk of catching tuberculosis from the one idiot who always seems to show up sick and then cough through the entire evening. They should have given that person a credit as a soloist on Someday My Prince Will Come.

If you attended the original concerts, well, how could you not witness such a planetary alignment? And yet, heavenly music isn’t in the offing for those who purchase An Evening with Herbie Hancock and Chick Corea. The pair play on top of each other much of the time with mixed results. Sometimes, the chemistry is electric, but those serendipitous encounters along the ivory path are the exception in these bustling performances. During Herbie’s solo performance on February Moment, I found myself enjoying the spaces in between the notes and the clarity of following only one composer.

Of course, the whole purpose of the performances and the albums was to answer the question of what it would sound like to bring two of the world’s greatest piano players together for one night. It sounds notey, confusing, thrilling, thoughtful, et cetera, as though the normal range of musical emotions were speed dating for fifteen minutes. I don’t hear where Corea has anything deep to add to Hancock’s Maiden Voyage or Hancock to Corea’s La Fiesta; in fact, the evening might have been just as interesting if the pianists took turns playing their own pieces while the other watched admiringly.

You can pick any one song from here—“La Fiesta,” Liza—and the possible combinations are pretty much exhausted. In that sense, the idea of two great piano players playing at the same time is played out past its logical conclusion. And, when you think about, a brilliant pianist paired with a brilliant bass, drum and horn player is more interesting, isn’t it? More common too, of course, which is ultimately what makes these Corea/Hancock concerts so very special.