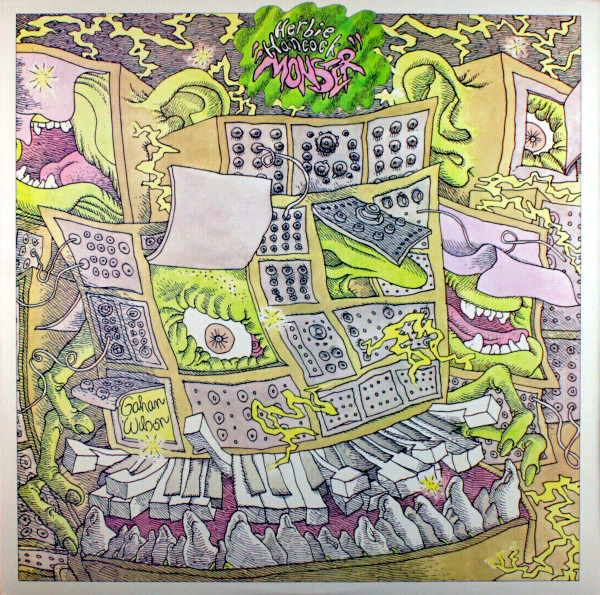 A king masquerading as a Duke, as Herbie gets his funk on, this time with some help from Santana.

Monster is another of Herbie Hancock’s funk/disco albums. This would usually be where I begin to denigrate disco as an inferior medium for a man of his stature, but I gots a booty like everybody and sometimes it needs a good shaking. Most of the Miles contingent sacrificed a few albums to the gods of the dance, and few of them are done better than Monster. Hancock assembled an impressive arsenal of electronic keyboards, including one of the earliest appearances of the Clavitar (a combination keyboard/guitar, which you can hear put to good use on “Don’t Hold It In”). The album is also notable for appearances by Carlos Santana and Santana vocalist Greg Walker.

Every track on Monster has vocals (Hancock mercifully keeps to his keys), with guests Walker, Bill Champlin, Gavin Christopher and a returning Oren Waters each taking a turn. The rest of the band is pretty much a pick-up from his last (Sheila Escovedo, Wah Wah Watson, Freddie Washington, Ray Parker Jr.) with the new addition of Alphonse Mouzon on drums. While the album was a commercial success (half of its songs were issued as singles), there are some who would tell you that Monster is merely commercial product (in fact, I used to be one of those people). Yet the truth is that anything made out of plastic with a universal price code is product.

Hancock’s interest in disco, funk and rock is legitimate, and Monster has a lot to offer musically, from the Latin crossover of “Saturday Night” (reminiscent of Chick Corea or George Duke‘s forays into Brazilian jazz) to the intelligent funk of “Go For It” (which anticipates acts like Was Not Was). It’s obviously not the first Herbie Hancock album you need to own, but don’t let those jazz snobs scare you away from Monster. If you’re interested in hearing Hancock in a disco/funk/rock setting with vocals and guitars (and the clavitar), go for it.