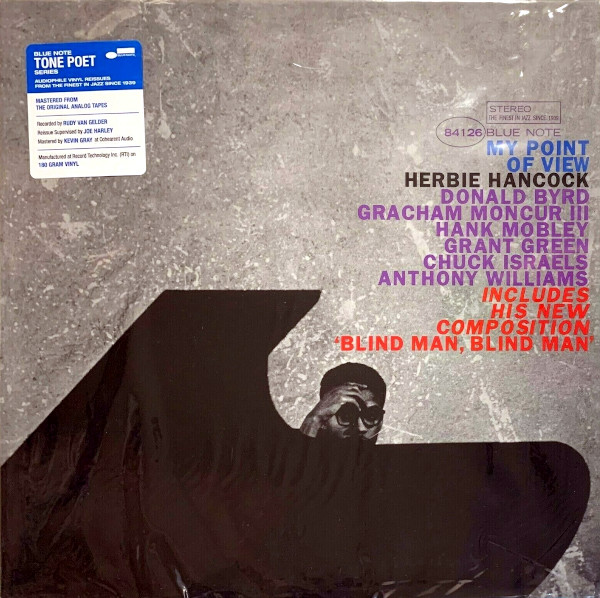 Basically all the goodness of his debut album plus the added joy of electric guitar.

Herbie Hancock shuffles the lineup but plays pretty much the same cards on My Point of View. His second album is notable for the inclusion of Donald Byrd, who had taken Hancock under his wing years earlier, Hank Mobley and a 17-year-old Tony Williams. Creatively speaking, it’s a lateral move, with Hancock reiterating the musical points he made earlier on Takin’ Off.

“Blind Man, Blind Man” is essentially a rewrite of “Watermelon Man;” from a distance, I couldn’t tell the two apart. “The Pleasure Is Mine” and “A Tribute To Someone” continue to balance out the barrelhouse numbers with gentrified jazz. I don’t mean to sound dismissive with that word, since “A Tribute To Someone” is one of my favorite songs on here and a fine showcase for Mobley’s smooth-as-butter tenor. It’s just that Hancock’s early songs tend to consist of either a few notes hammered out in rhythmic repetition or cosmopolitan clusters of notes presented in well-mannered melodies. One amelodic entry does slip into the set, “King Cobra,” which will appeal to fans of more difficult jazz. The closing “And What If I Don’t,” by contrast, is surprisingly accessible and melodic enough to qualify as pop music.

Hancock has a remarkable sense of rhythm and swing, which makes his later interest in funk part of a logical arc. Personally, I prefer the Blue Note sessions of Empyrean Isles and onward, as Hancock became more confident as an arranger/composer. His point of view would get more profound with time. My Point of View is certainly worth a listen, especially for Byrd watchers who remember Hancock as a piano prodigy. The post-Miles Hancock, however, is a bird of a different feather. Oh, and as for Williams’ early performance, to borrow a Monty Python quote, he got better.